Djúpalónssandur is a black pebbled beach located on the Snæfellsnes peninsula in West Iceland. The beach is at the foot of Snæfellsnesjökull glacier and is one of the highlights of West Iceland. The black pebbles are constantly being brought to the beach by the ocean waves but it is forbidden to pick them as they are protected and Icelanders want to keep them at the beach.

From the road there is a path that leads through a lava field, with amazing lava formations, to the beach. The scenery on the way and on the beach is magnificent with the Snæfellsjökull glacier towering over the place. One of the most noticeable thing on the beach is a big lava rock called Söngklettur or the Singing Rock. The rock has a red color and is said to be protected by the elves in the area. There is also a lagoon called Svörtulón or the Black Lagoon at the beach and in front of the lagoon is Gatklettur, a rock with a hole through it.

The Lifting Stones
Back in the days Djúpalónssandur used to be a fishing village and home to about sixty fishing boats. On the beach there are four big stones all in different size. These stones are called Aflraunasteinar or lifting stones as they were used by the fishermen in Iceland to measure their strength to see if they were qualified to work on the fishing boats. The smallest stone is called Amlóði and weighs 23 kilos, next one is called Hálfdrættingur and weighs 54 kilos, then there is Hálfsterkur that weighs 100 kilos and the last one and the heaviest one is Fullsterkur who weighs 154 kilos. You are welcome to try to lift the stones to measure your strength, if you dare.

The Epine GY7
On the beach there are ruins of a shipwreck lying around there in the sand. These ruins are from a British fishing ship called The Epine GY7 that was wrecked there on March 13, 1948. Fourteen men lost their lives that day and five lived. The ruins from the ship are kept on the beach in memory of the fishermen and should not be touched.

About 1 kilometer west of Djúpalónssandur beach is a small bay called Dritvík. It used to be the largest seasonal fishing station in Iceland from the 16th century until the mid 19th century. There are still some ruins there from that time. It is possible to walk from Djúpalónssandur beach over to Dritvík and the hike is about 1 km long.

The waves by the beaches in Iceland are very unpredictable and the suctions of the sea in Djúpalónssandur is very powerful and dangerous. Even though the waves might seem innocent you can never know so please don’t go too close to the ocean and read the warning signs by the parking lot. Sadly fatal accident have happened by the beaches in Iceland when warnings and restrictions are ignored.

There is a parking lot above Djúpalónssandur from there the hike to Dritvík is about 1km.
From Reykjavík the drive to Djúpalónssandur is about 2 hours and 35 minutes (200 km). Take Ring Road nr.1 towards the town Mosfellsbær. Take the Hvalfjörður tunnel and keep following road nr. 1 to the town Borgarnes. When in Borgarnes take road nr. 54 towards Snæfellsnes Peninsula. Drive for about 1 hour and then take a left turn towards Arnarstapi and from there it is about 20 minutes drive to Djúpalónssandur.
Read more about Driving in Iceland. 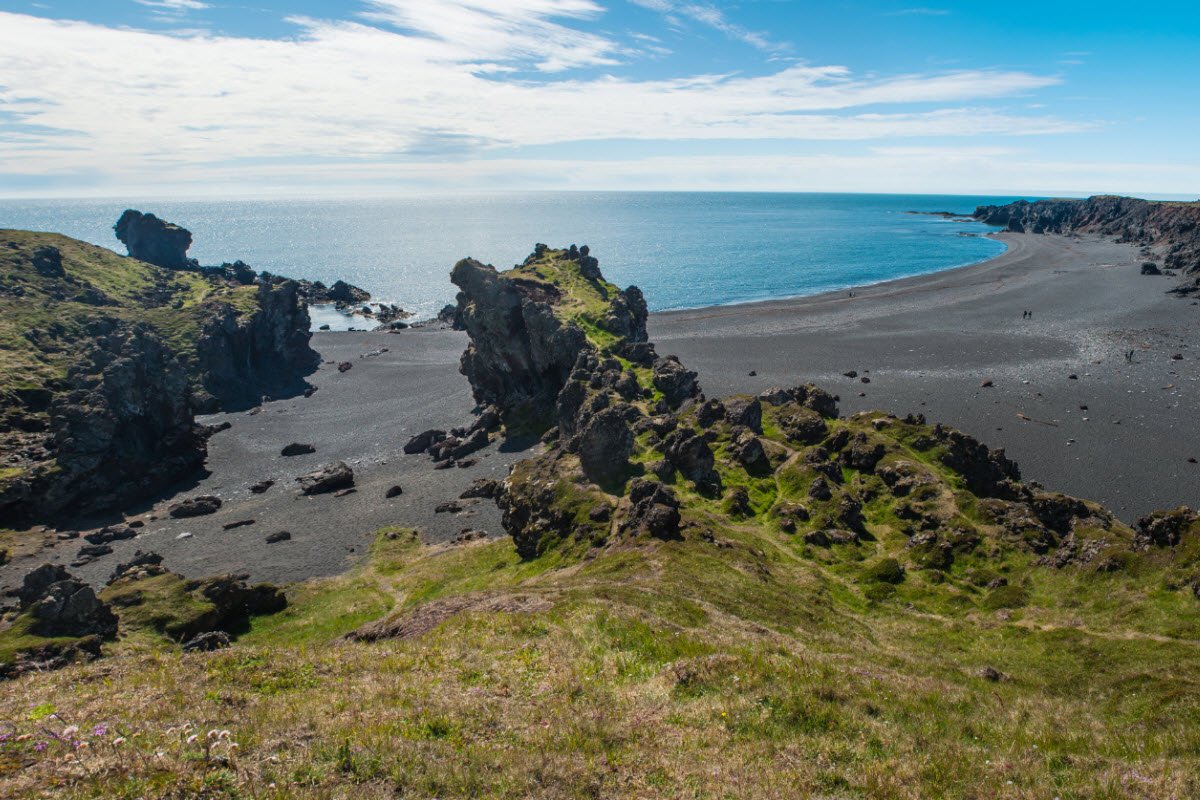 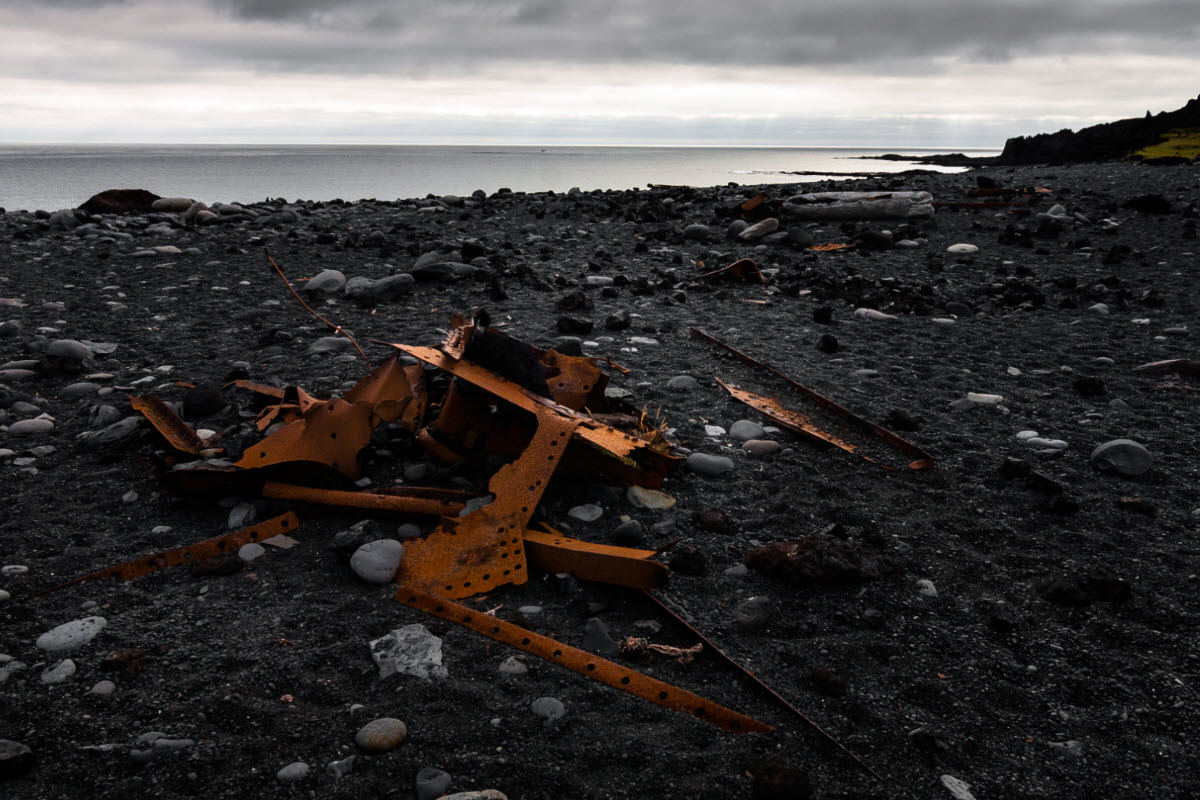 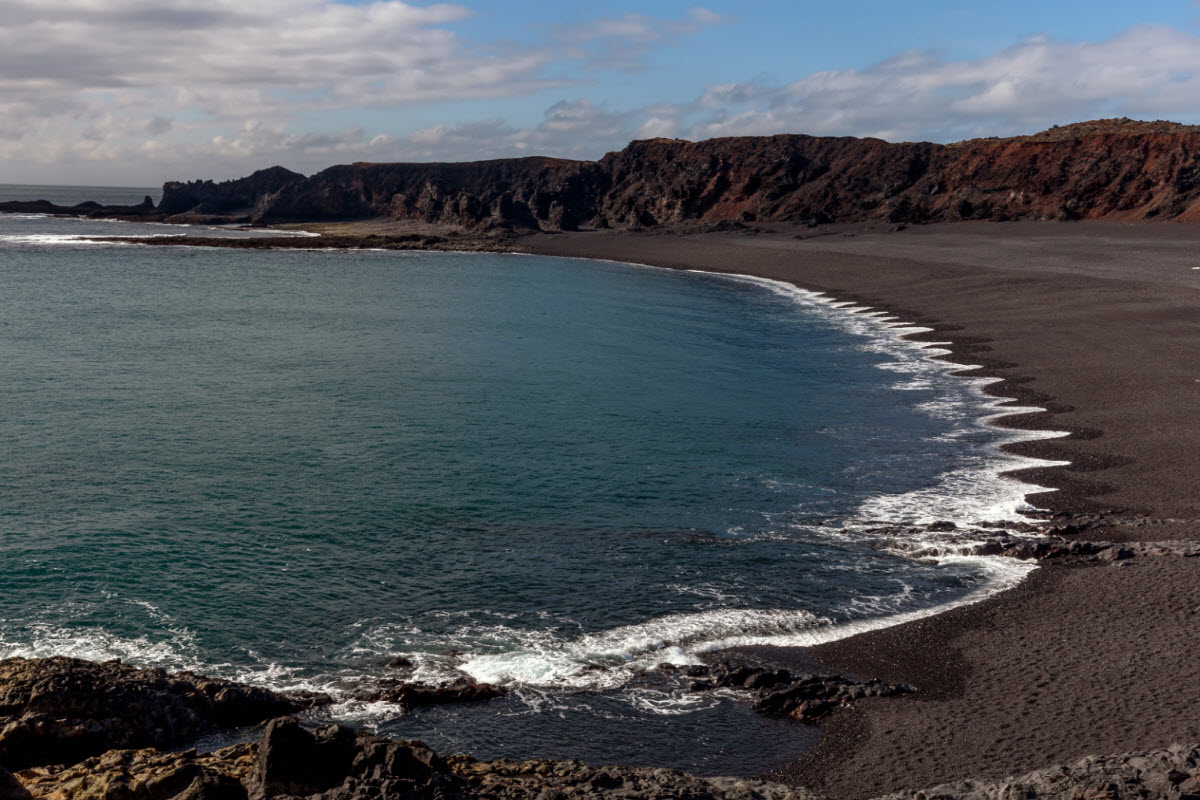 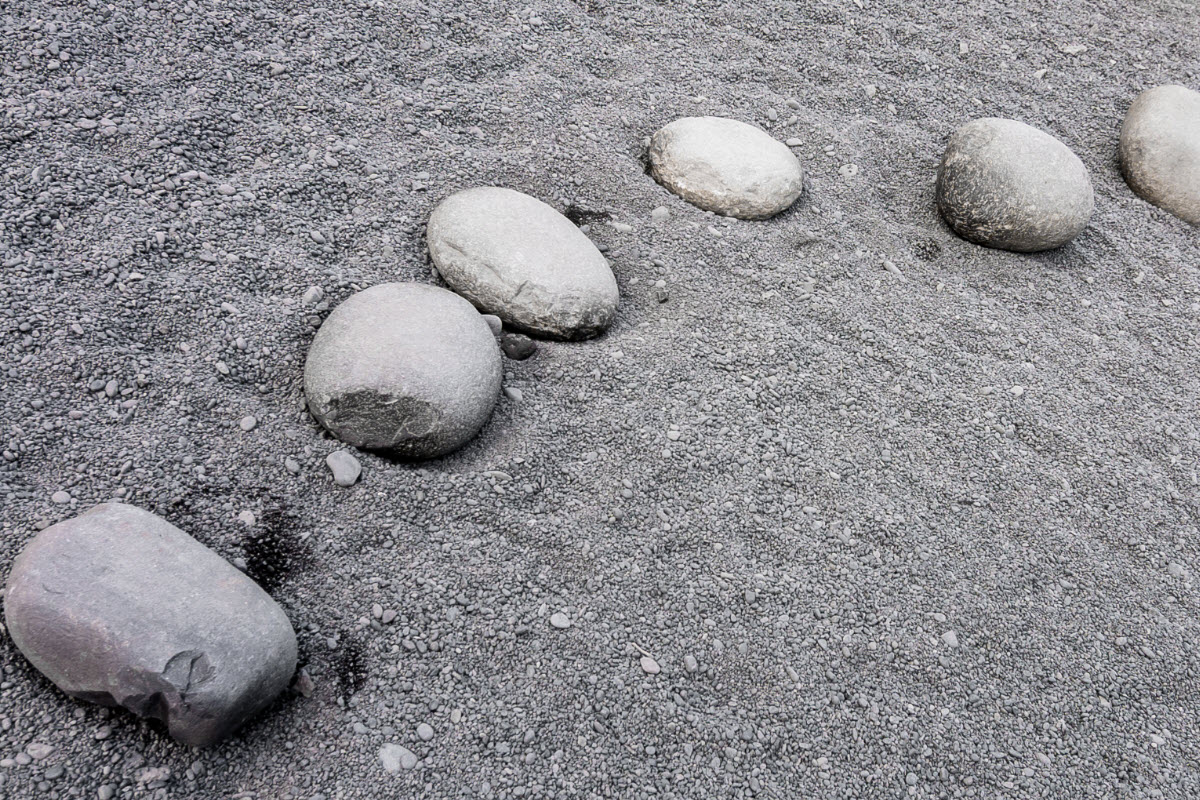 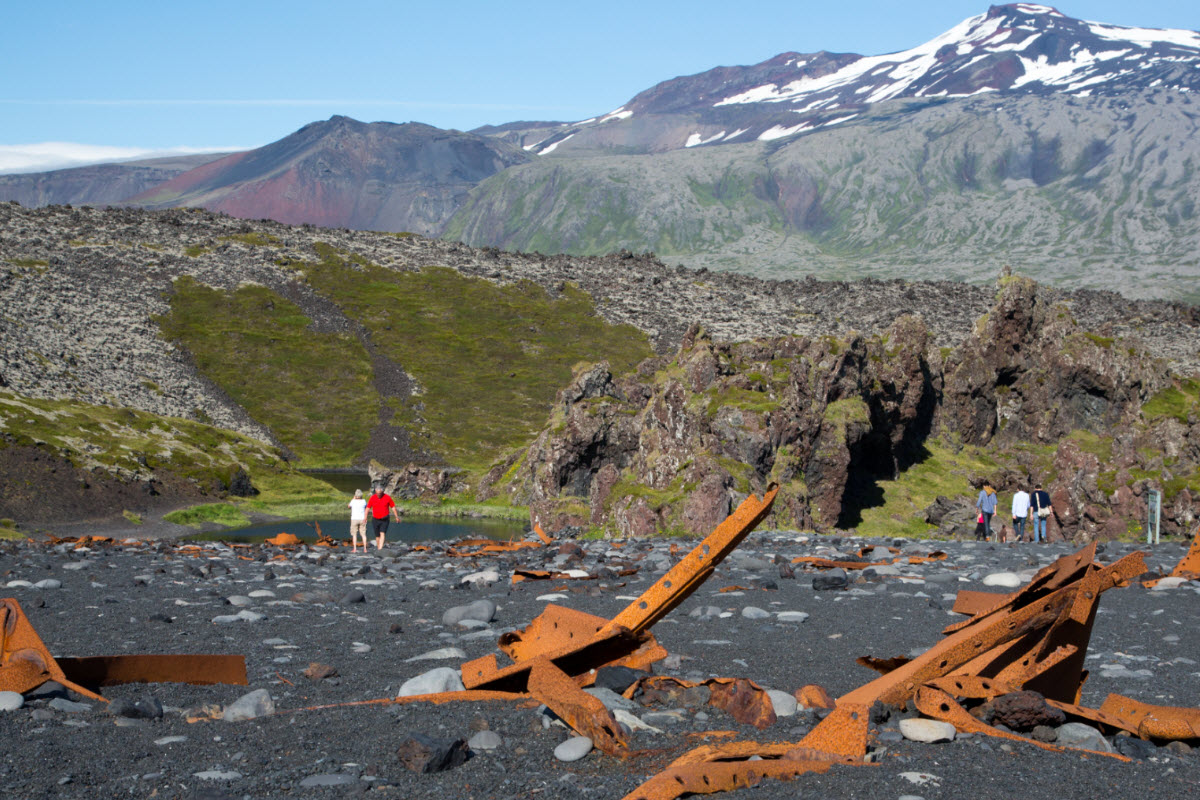 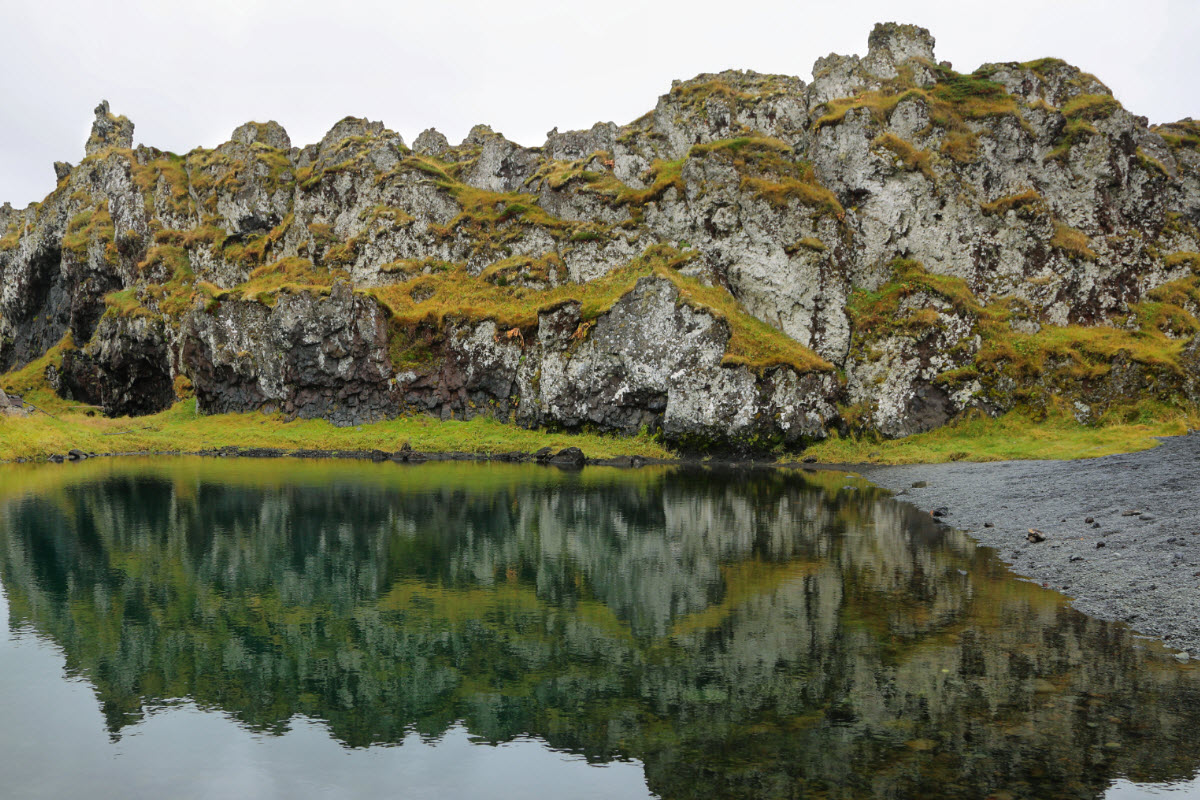 The lifting stones at Djupalonssandur in West Iceland

Remains of the boat wreck at Djupalonssandur in Snæfellsnes Iceland