Located in the canyon of the Hvítá river in southwest of Iceland is one of Iceland’s most iconic and spectacular waterfall Gullfoss or the Golden waterfall. The source of the waterfall comes from Iceland’s second biggest glacier Langjökull. The water travels southward about 40km from the glacier until abruptly cascading down in two stages, the first stage about 11 meters (36ft) high and the second stage about 21 meters (69ft) high, into a crevice 32 meters (105ft) deep.

Walking around the paths in the area around Gullfoss provides you with stunning views over the waterfall. On a sunny day it is decorated with thousands of shimmering rainbows and the sight over the waterfall in the winter time, when the water freezes over, is breathtaking.

Gullfoss has often been said to be one of the most beautiful waterfalls in the world and it certainly is one of the most popular tourist attractions in Iceland. It is a part of the famous route Golden Circle along with Geysir and the national park Þingvellir.

Gullfoss is located about 118 km from Reykjavik. Take Ring Road nr. 1 towards Selfoss and just before the town turn left on road nr. 35 and then drive for about an hour until arriving at Gullfoss. From the parking lot there are walking paths with good views over the waterfall.

Read more about Driving in Iceland

The memorial of Sigríður Tómasdóttir sits by the waterfall, but she is known to be one of Iceland’s first environmentalist. In the early 20th century Gullfoss was owned by Halldór Halldórsson and Sigríður’s father Tómas Tómasson. In 1907 a foreign investors wanted to harness the power of the waterfall to produce electricity and rented the waterfall from the owners. Sigríður was very much against this as it would have destroyed the waterfall so she hired a lawyer from Reykjavík do defend her case and protect Gullfoss. The trial lasted for years and Sigríður had to walk a long distance (about 120 km) to Reykjavík many times to follow up on her case and she even threatened to throw herself in the waterfall. Luckily the constructions never happened, the contract with the investors was annulled and later Gullfoss was sold to the Icelandic government. 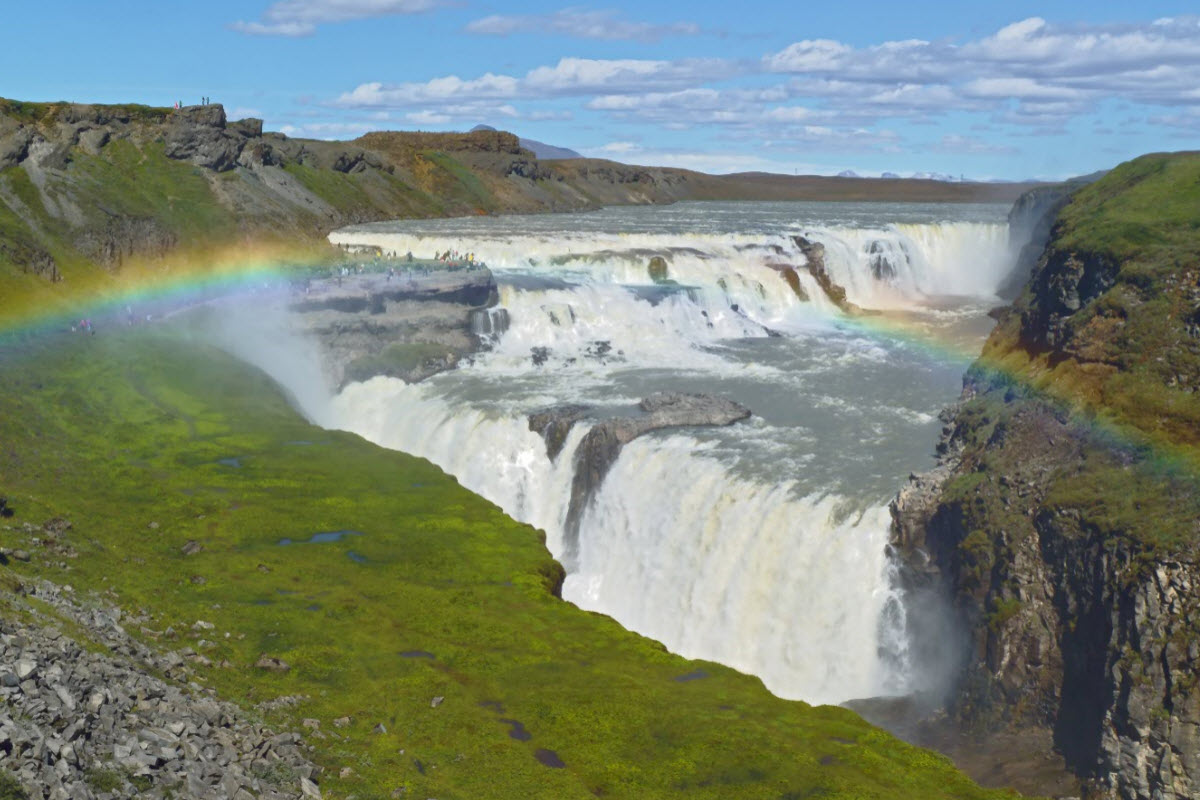 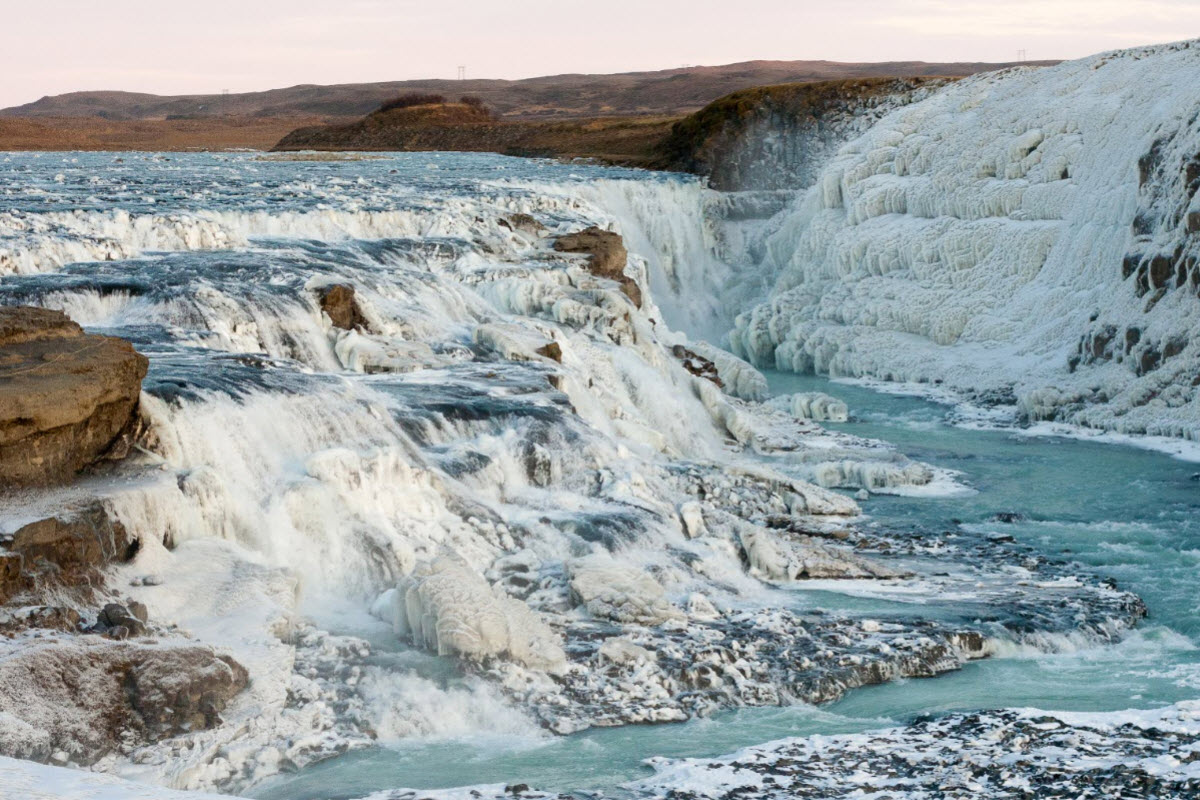 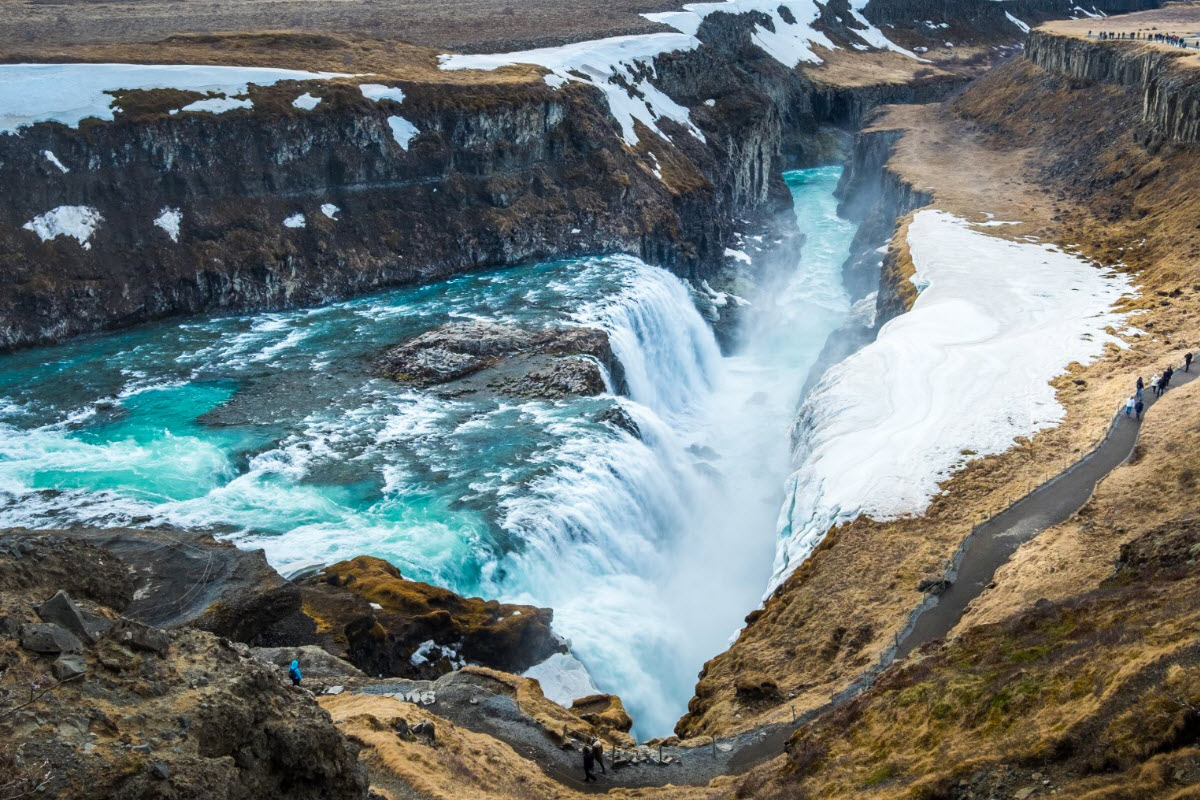 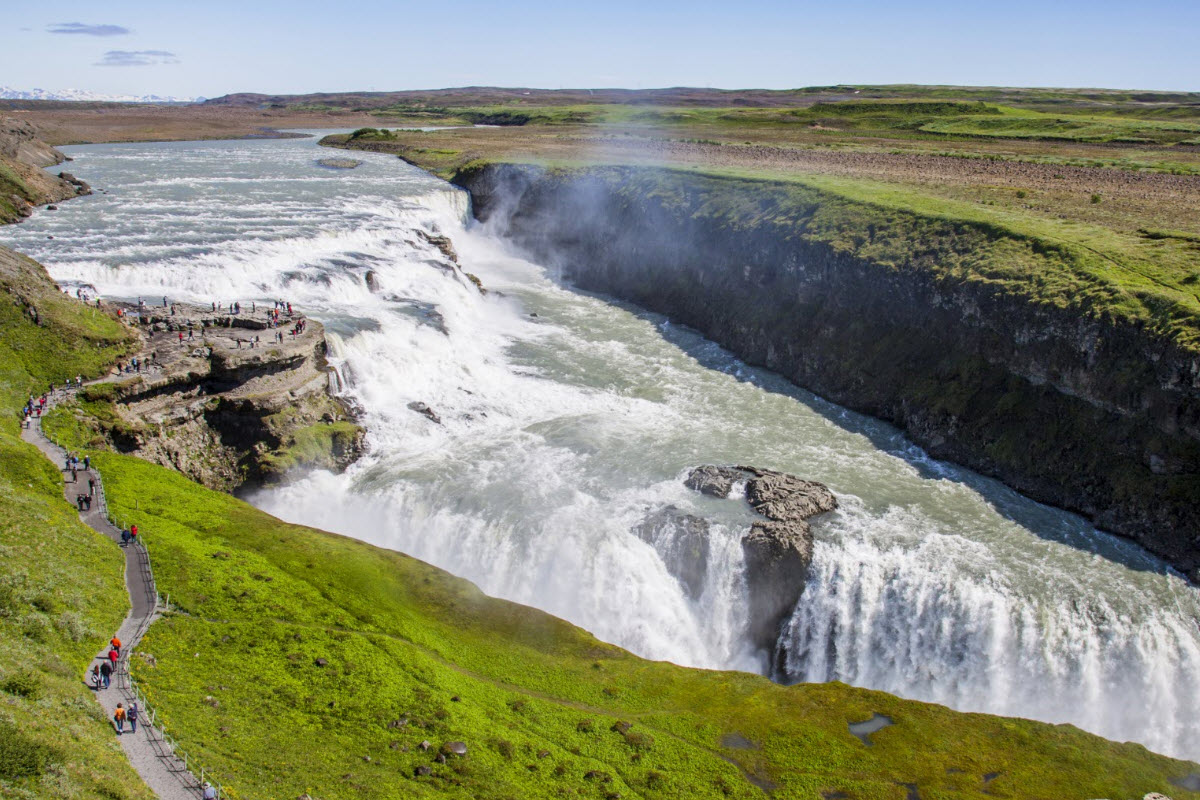 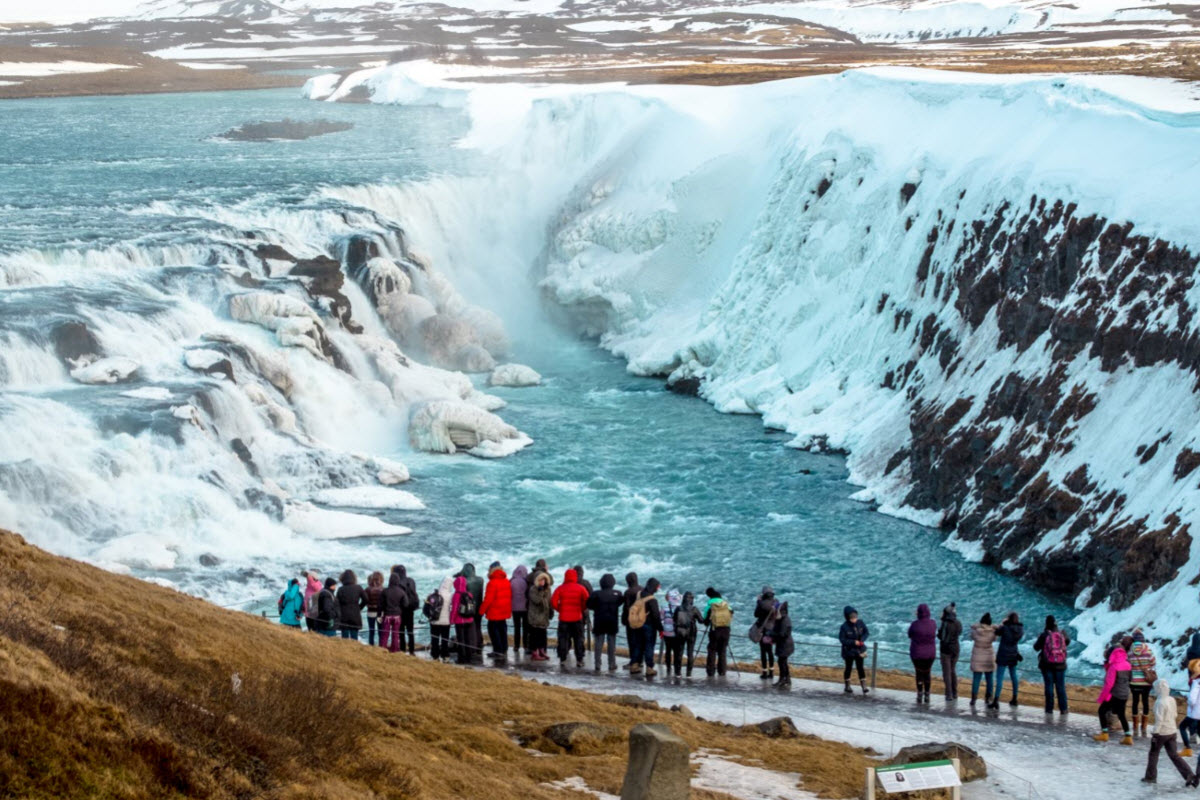 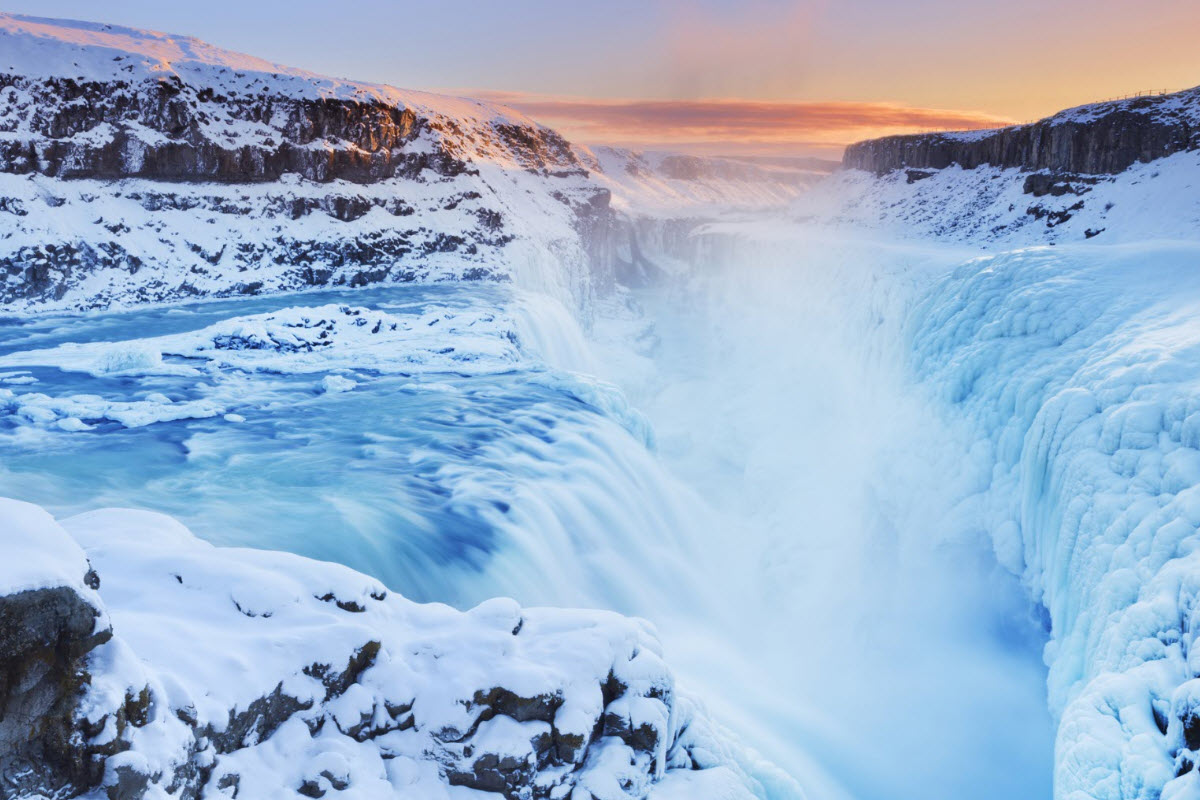 Beautiful Gullfoss in the summer time in Iceland

Gullfoss looks stunning when it freezes over during the winter

Gullfoss waterfall in South Iceland is part of the Golden Circle

Gullfoss waterfall during winter in Iceland

Gullfoss waterfall during winter in Iceland

Gullfoss is part of the Golden Circle Route

Stay on the walking paths and follow the signs The famous Golden Circle tour in a Super Jeep, visit the highlights of Iceland; Þingvellir, Geysir and Gullfoss Get the best view possible of Kirkjufell, Europe’s most photographed mountain on this 3-hour guided kayak tour.