Volcano Katla, back in business?

The volcano Katla is probably one of the most famous volcanoes in Iceland, it’s located underneath Mýrdalsjökull ice cap the fourth largest glacier in iceland covering about 600 km2, with thickness of ice up to around 750 meters. The caldera of the volcano Katla is around 110 km2 making it the second largest caldera in Iceland.

Katla volcano and the past

In the past Katla has been one of the most active volcanoes in Iceland and at the same time one of the most devastating, taking people’s lives, destroying farmland and killing livestocks.
To sum it up Icelanders respect Katla and like to know what she is up to all the time.

For the past hundreds years we have been waiting for a big volcanic eruption in Katla, and we are still waiting. The last big volcanic eruption in Katla was in October 1918. Since that time Katla has probably erupted few times but only small eruptions that did not melt through the ice cap of Mýrdalsjökull. Although, these small eruption did melt a quite a lot of glacier ice underneath the glacier costing small glacier outburst in the years 1955, 1999 and 2011.

What can we expect from Katla?

During the time when Eyjafjallajökull volcano was getting ready for eruption in 2010, Katla was active at the same time with thousands of small earthquakes. The ground was also rising underneath the caldera because of magma flowing into the magma chamber underneath.

During late summer and autumn Katla usually wakes up and starts shaking. Maybe because of decrease in weight of snow and ice that has been melting over the summer. Now for the past week Katla has woken up, and is reminding us that she still exist and we should not forget about here. Scientists say that Katla is hard to predict, she doesn't have any pattern and she has been giving out signs for some time but then the next day she is back to sleep.

It will be interesting to see what will happen this year, it will be 100 years anniversary next October, so maybe we should be awake and see if she will celebrate with a big blast.

You can follow up with the earthquake activity in Katla on the web side of the Icelandic weather bureau. 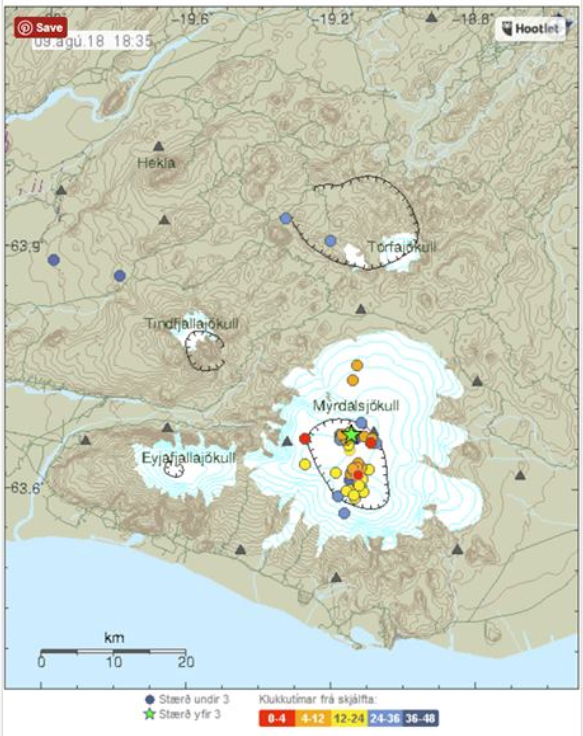