Vatnajökull National park was established in 2008 and covers all of Vatnajökull glacier and surrounding areas including Skaftafell in the south and Jökulsárgljúfur in the north. The park covers about 14% of Iceland and is one of the largest national park in Europe. The unique qualities of Vatnajökull National Park are first and foremost how the combined forces of volcanoes, glaciers, rivers and geothermal activity have created a great variety of landscapes throughout history.

Vatnajökull glacier covers a large area of the national park or about 8,100 km2. The glacier is the largest and most voluminous ice cap in Iceland and one of the largest in Europe. Average thickness of the ice in the glacier is 400 meters (1,300 ft) and a maximum thickness is 1.000 meters (3,300 ft). Hvannadalshjúkur is the highest peak of Iceland about 2.109 meters (6,921 ft) and is located in the southern part of Vatnajökull. Underneath Vatnajökull some active volcanoes can be found, The most active are Grímsvötn and the largest is Bárðabunga who erupted in 2014 and created Holuhraun lava field.

The varied area of the national park is characterized by the everlasting struggle of fire and ice and some of the most stunning natural phenomena in Iceland can be found there.  To the north of the glacier, in the highland, the volcano Askja along with the queen of icelandic mountains, Herðubreið feature prominently in the area. Also found in this area is the most powerful waterfall in Europe, Dettifoss. The waterfall is situated in Jökulsá á Fjöllum river, which flows from Vatnajökull glacier. The waterfall drops 44 meters down to the magnificent Jökulsárgljúfur canyon. Further north are Hljóðklettar a distinctive cluster of columnar rock formations and the horseshoe shaped canyon Ásbyrgi. Volcanic activity characterizes the landscape west and east of Vatnajökull. To the west are two of the world’s greatest fissure and lava eruptions of historical times that happened in Eldjá in 934 and in Lakagígar 1783-1784. To the east the volcanoes of Kverkfjöll and Snæfell tower over the region.

In the south region is the former national park Skaftafell which became a part of the larger Vatnajökull National park in 2008. Skaftafell is a paradise for those who like to enjoy outdoor activities in Icelandic nature. The area in Skaftafell is truly a natural wonder created throughout the history by different influences of fire and ice. Frequent volcanic eruptions in the area, mostly in Grímsvötn, are the reason for the sandy wasteland between the glacier and the sea by the river Skeiðará. These sand are mostly composed of ash and is brought to the coast by glacial floods (Jökulhlaup).

Extending south from Vatnajökull is Öræfajökull an ice-covered stratovolcano, one of the largest of its kind in Europe. Öræfajökull is popular for hiking but the highest peak in Iceland, Hvannadalshnjúkur, is located there. On the edge of the national park is Jökulsárlón, a large glacial lake naturally formed from the melting of Breiðamerkurjökull an outlet glacier of Vatnajökull.

Private travel companies operate in Skaftafell and offer guided hikes on the nearby glaciers and mountains.

The drive to Vatnajokull National Park/Skaftafell Visiting Center from Reykjavík is about 4 hours (320 km). Take Ring Road nr. 1 heading east and then take road nr. 998. Please check weather and road conditions before travelling in the park here and read more about Driving in Iceland. 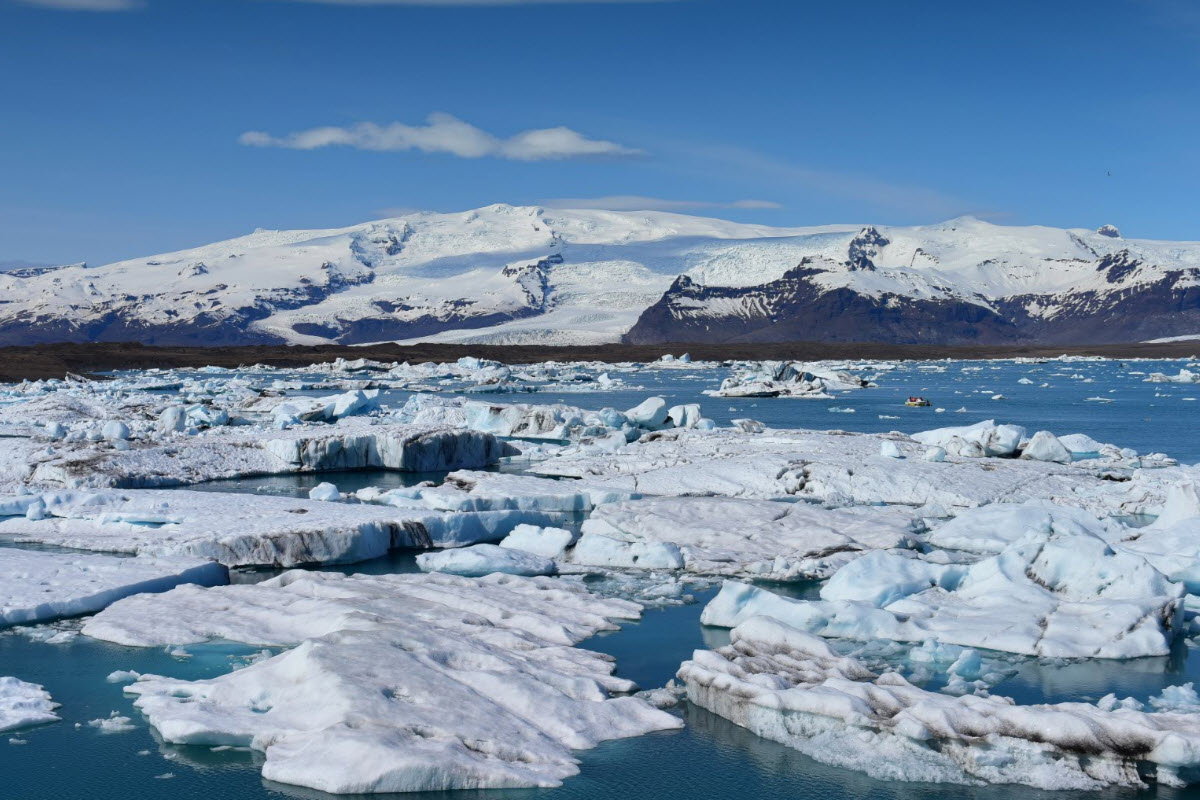 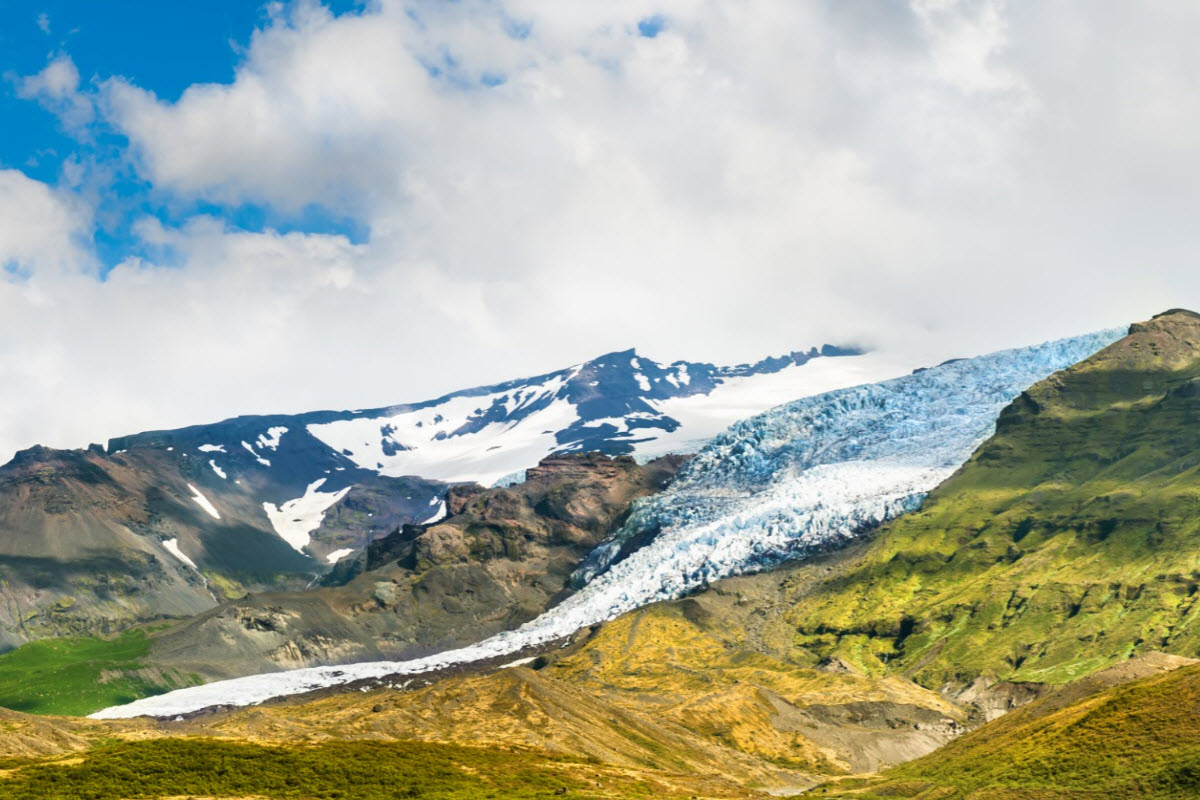 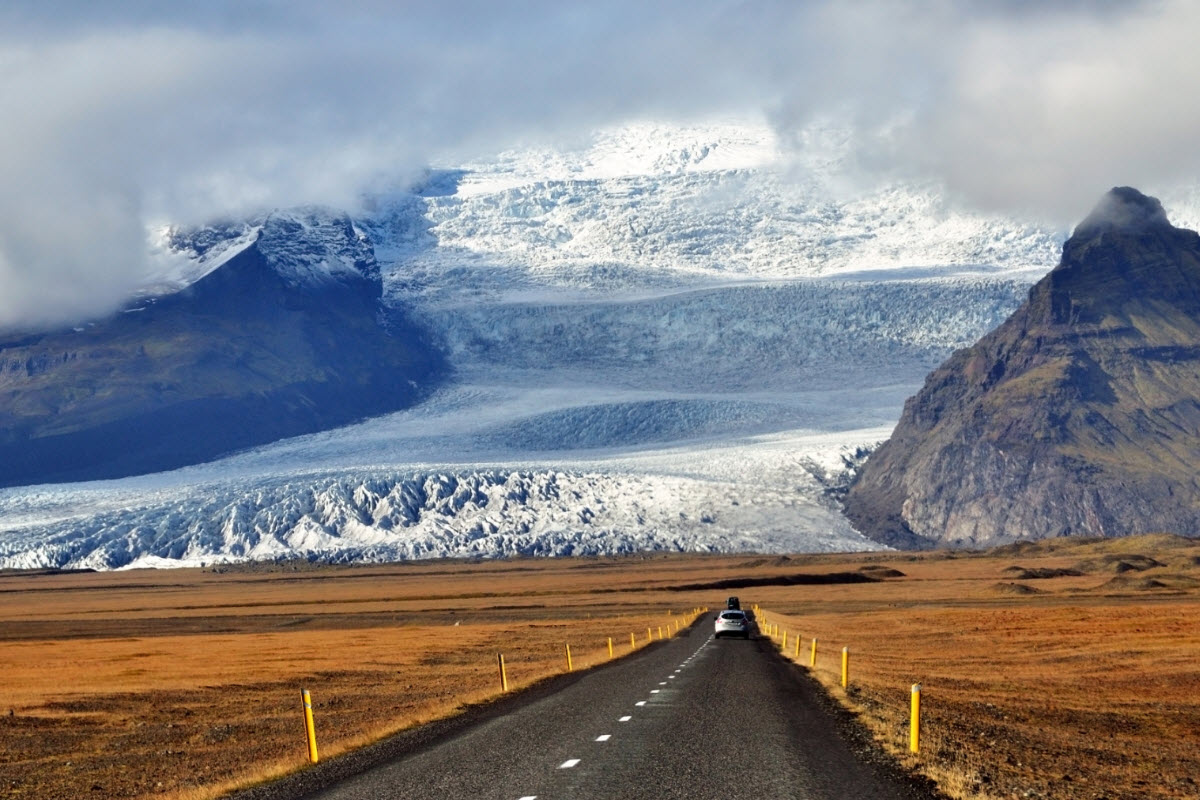 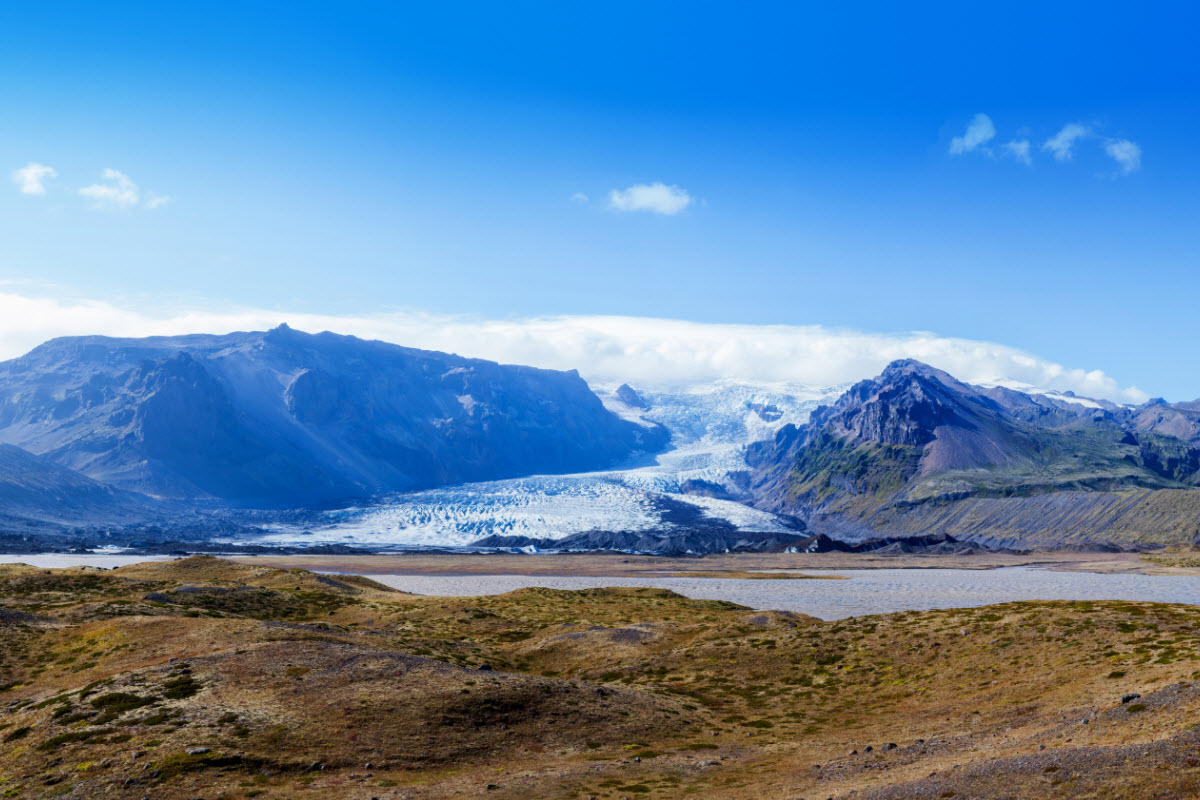 The amazing view from the road in Vatnajokull National Park

Please check weather and road conditions before travelling in the park