Eldgjá is a volcanic fissure from the north east part of Mýrdalsjökull glacier, which stretches about 50 km to the north east towards the Vatnajökulll glacier. Edlgjá formed during a massive volcanic eruption around 934 (934 to 936). The lava that flowed down from the fissure flowed all the way down to the coast line in Álftaver region in the south and down to the black lava sand area of Mýrdalssandur east of Vík. It also flowed to the south east towards the area west of the village Kirkjubæjarklaustur and Eldhraun lava field. The lava field covers around 700 to 800 square kilometers and it stores at least around 18 cubic kilometers lava.

The volcanic eruption was humongous and reconstructed the landscape in the area. It is also believed that the eruption had a global effect on the climate. There are written sources of great and unusual cold periods in the Middle East and the Europe at the time and therefore affected the life of people around the globe.

When driving across the lava field of Eldhraun one might notice a sharp lava cones standing out from the black sand area of Mýrdalssandur. The volcano Katla has been covering the old lava field with black lava sand after floods coming down over Mýrdalssandur area since the settlement time.

Further east there is more moss covering the lava from Eldgjá and between the Eldhraun lava field and Kirkjubæjarklaustur some interesting geological formation called Rootless cones can be found. The hot lava was flowing over swamp causing steam to build up and blow through the lava forming amazing Rootless cones in the area called Landbrotshólar.

When driving the mountain road, Nyðra Fjallabak Road nr. F208 on to F223, during the summer you will drive into the Eldgjá volcanic fissure, some places up to about 200 meter deep. A little bit further north east from the road F223 is the waterfall Ófærufoss falling down from the rim of Eldgjá, about 40 meter high. The waterfall is in a beautiful volcanic landscape mixed in with green moss.

Note: A 4x4 vehicle is required when driving in the highland of Iceland.
Read more about Driving in Iceland. 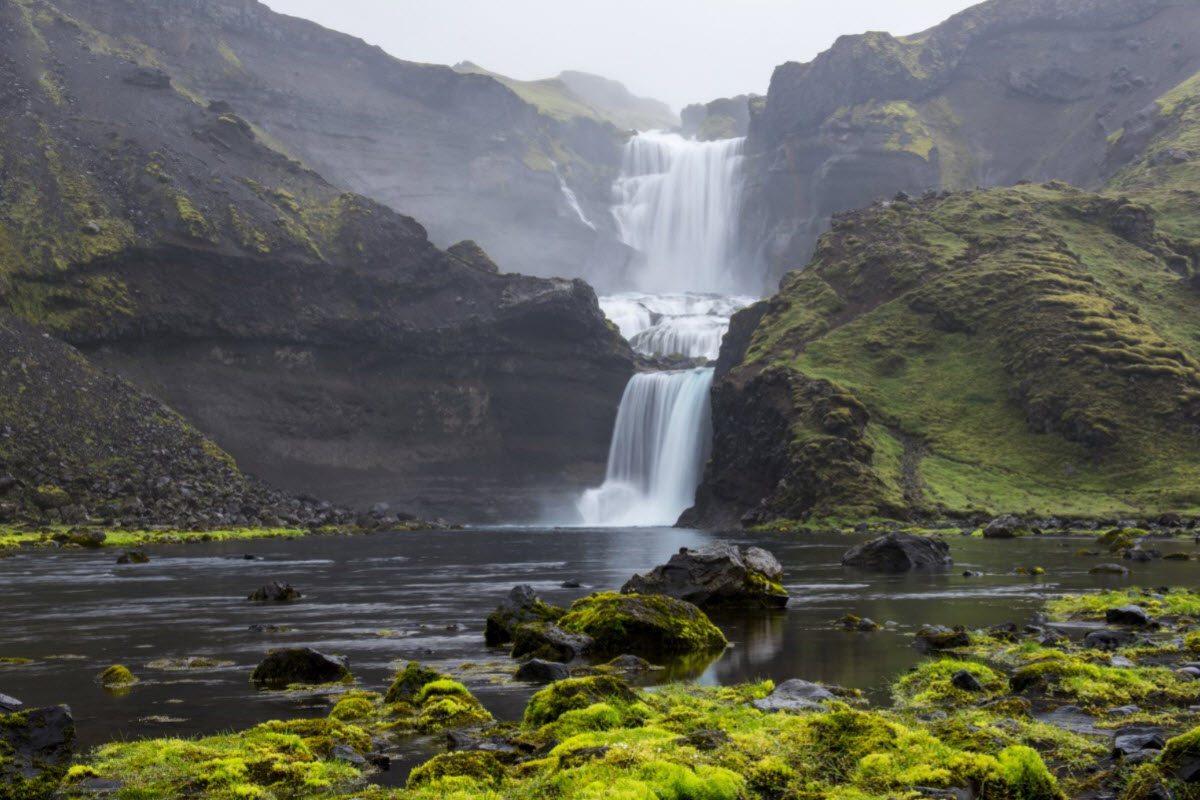 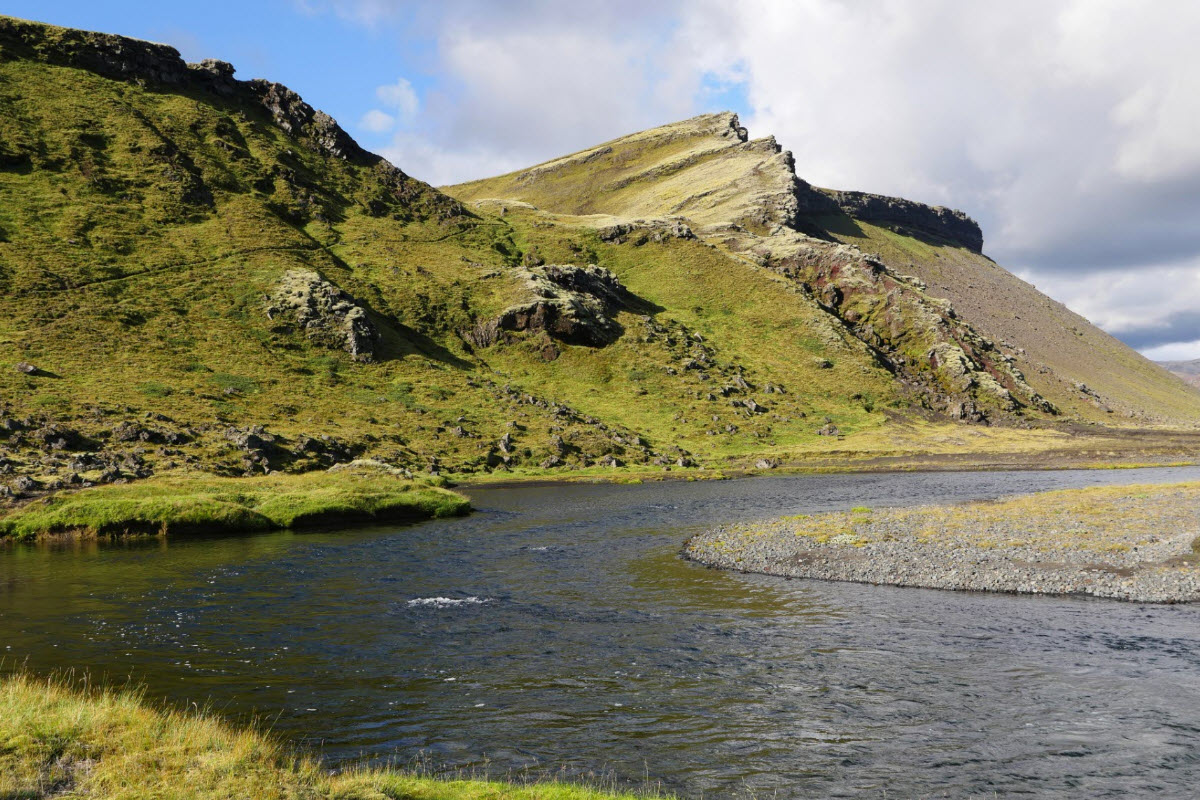 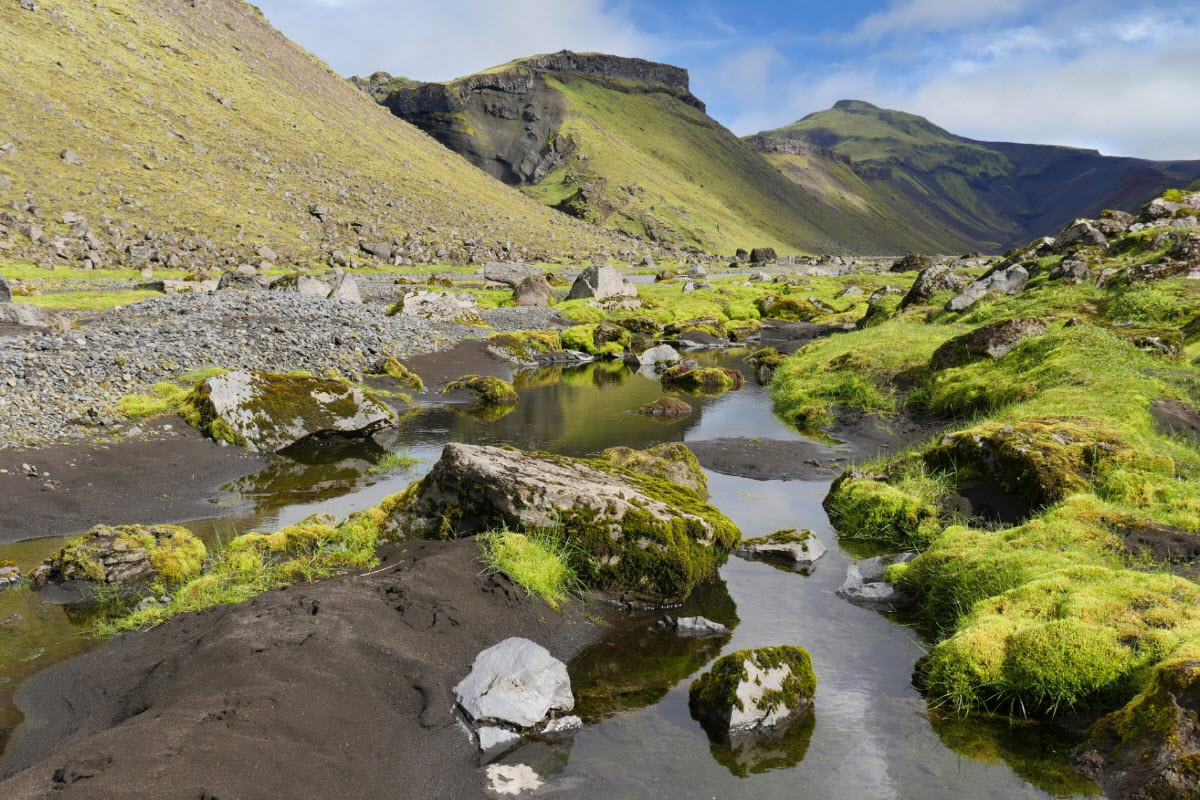 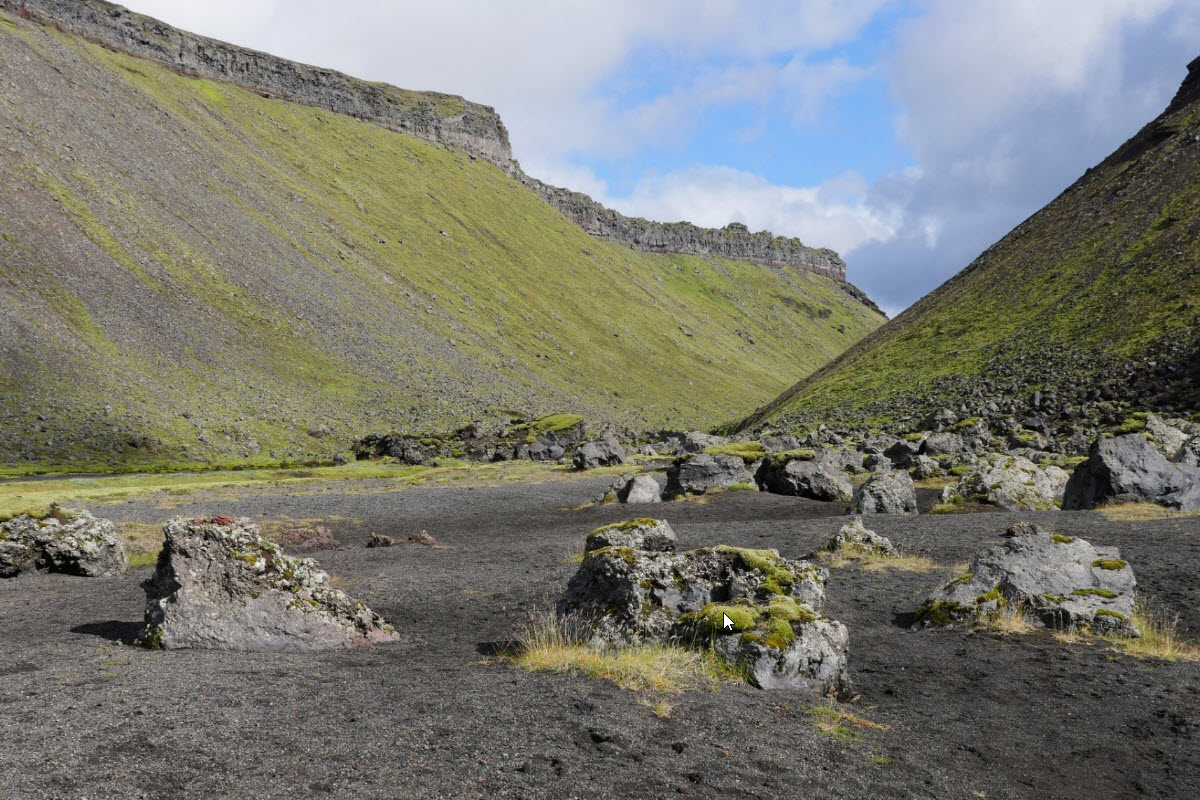 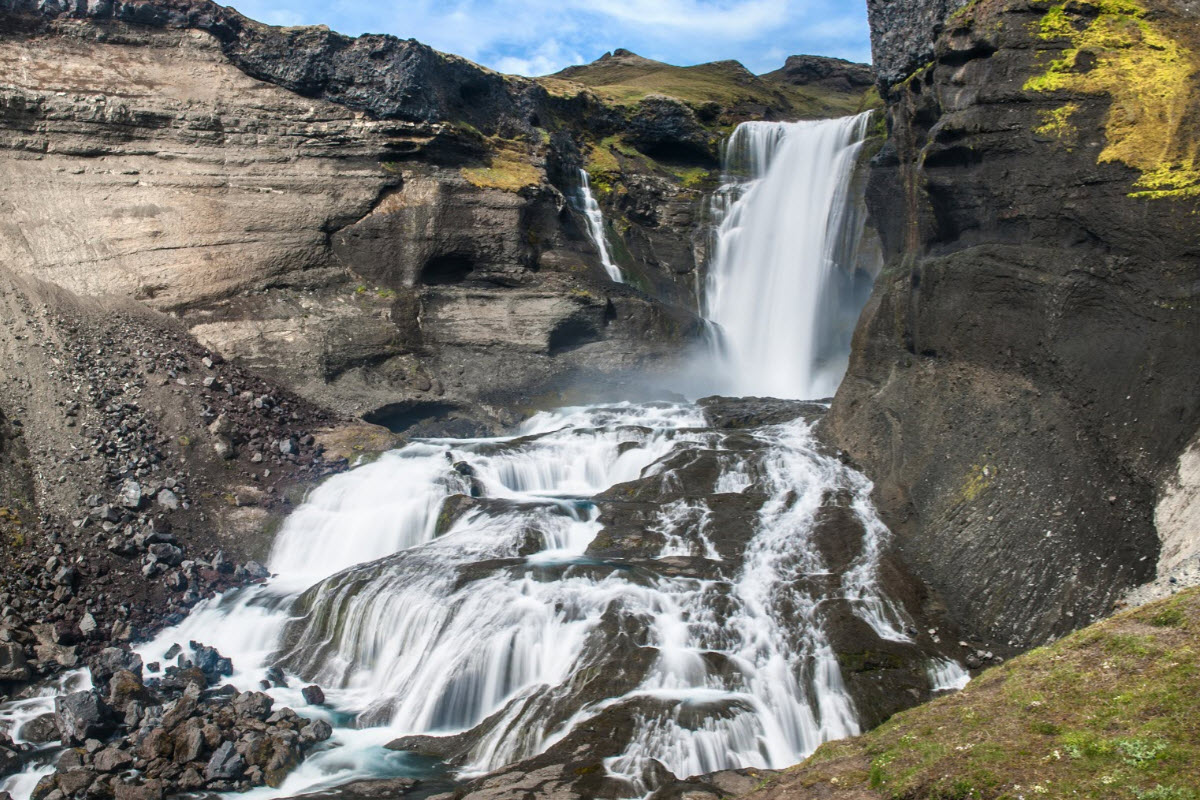 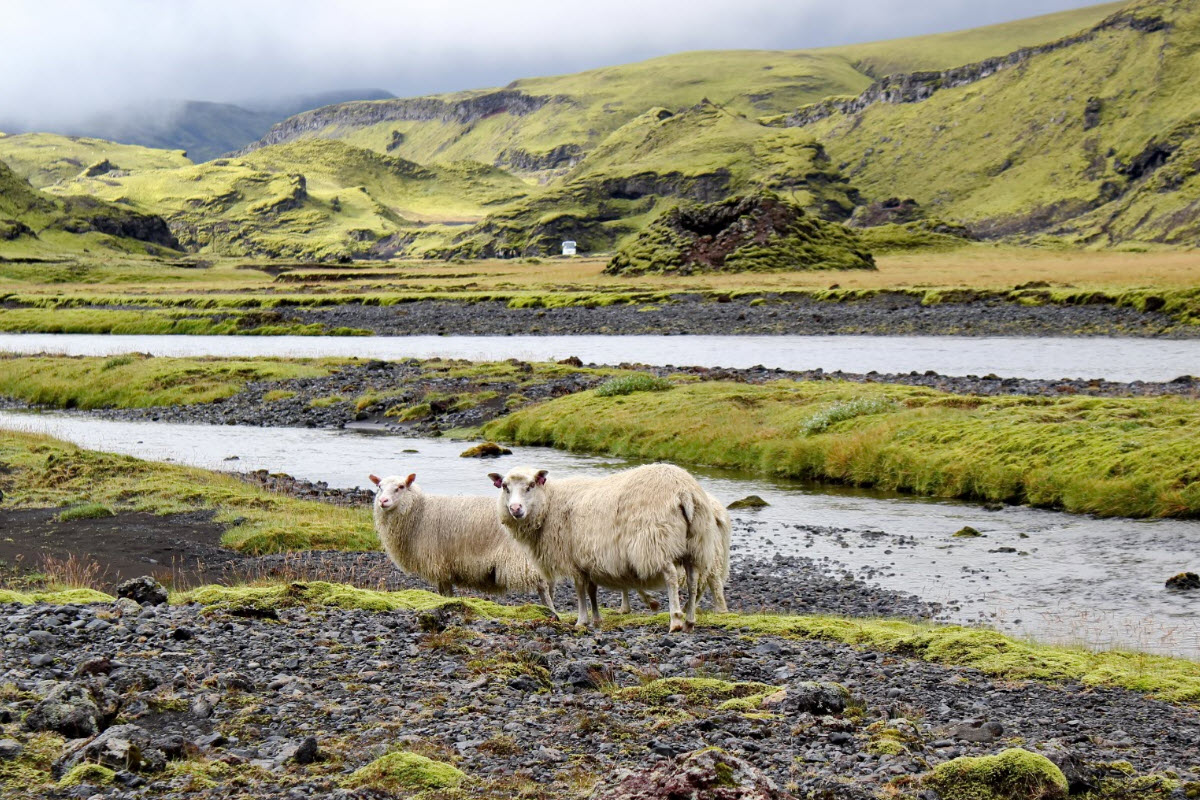 Canyon floor of Eldgja in Iceland

The surroundings is beautiful in Eldja Canyon

Eldgja formed during a massive volcanic eruption around 934