The Atlantic Puffin (Fratercula arctica), is a species of seabird in the auk family (Alcidea), he is one of the smaller auks, and also the most common. The puffin is most commonly found around the coast of Iceland, around sixty percent of the population breeds in Iceland.

The puffin can be found in the North Atlantic, he breeds in Iceland, Greenland, Newfoundland, Norway, along the coast of Maine in the US, in Ireland and United Kingdom in the east. It is believed that the total population of the puffin is around 14 million and the largest puffin colony can be found in Westman Islands in Iceland. 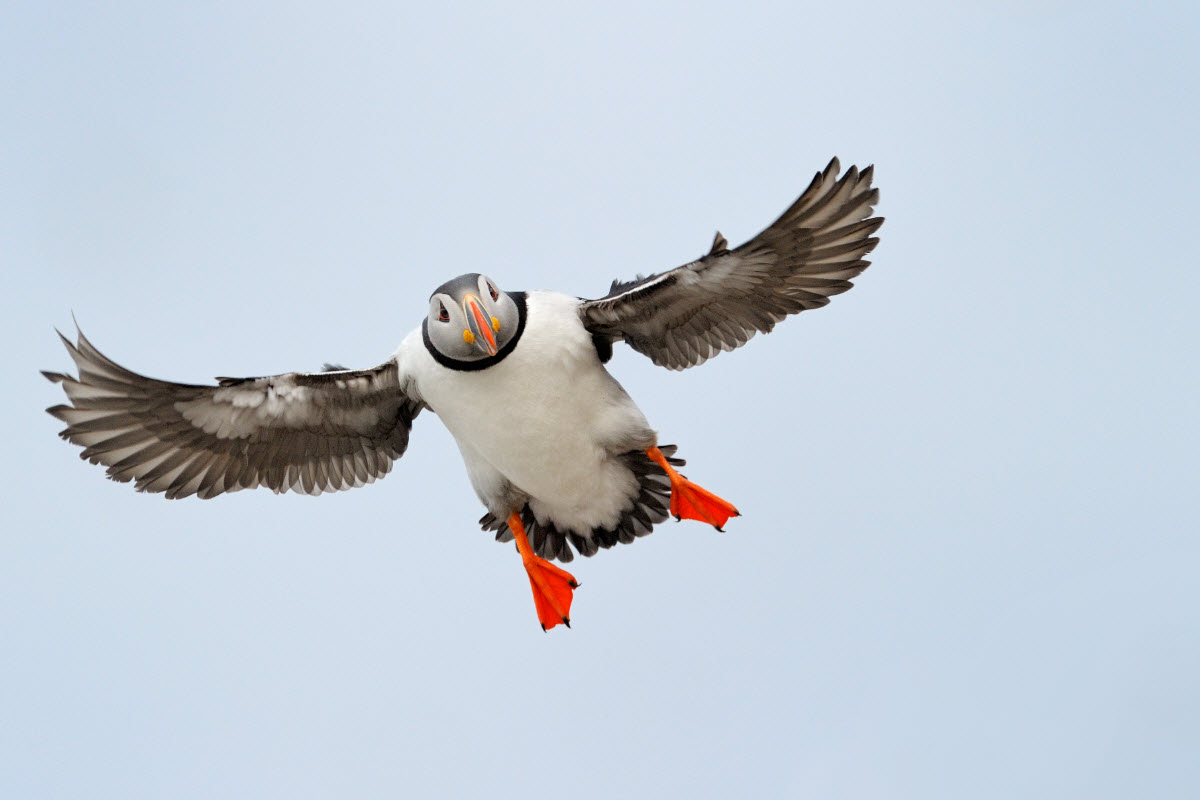 The puffin is a rather small bird, around 26-29 cm long and weights around 450-500g. His wingspan is around 47-65 cm. What makes the puffin special is the colourful, flat-sided beak. The adult puffin is black on top, white below, with black cap and black collar, his legs are orange.

The Puffin’s main food is sand eel and capelin, as well as fry, snake pipefish and krill. He is a good diver and dives for food to the depth of 60 meters and can spend about 1.5 minutes underwater. 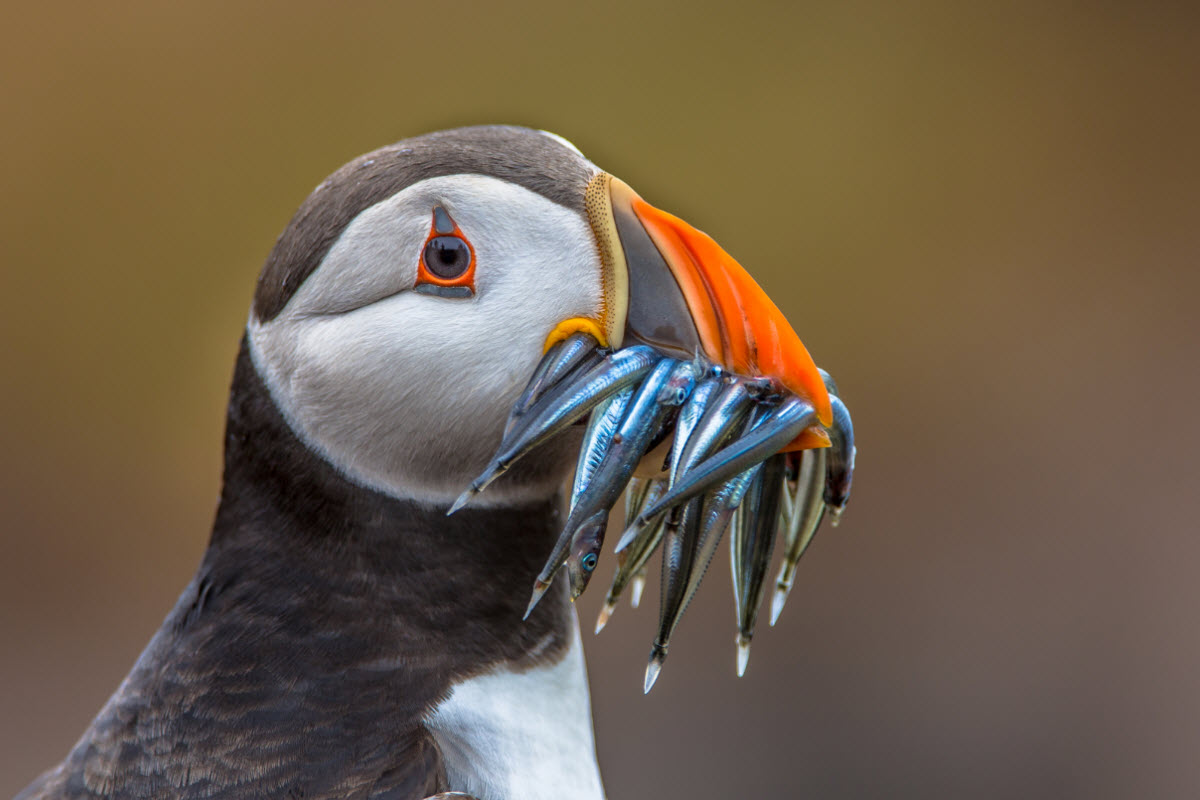 The Puffin spends most of his time out on sea but around april/mai the breeding season begins so they start nesting on grassy islands, headlands and slopes above clifftops or in screes below cliffs. Egg-laying usually begins in June in Iceland, but it can vary between locations. The female lays a single white egg each year, if it’s early in the breeding season she might lay another egg. Like most birds the puffin does not lay on the eggs but keeps them warm under their wings, both parents share the incubation responsibilities. 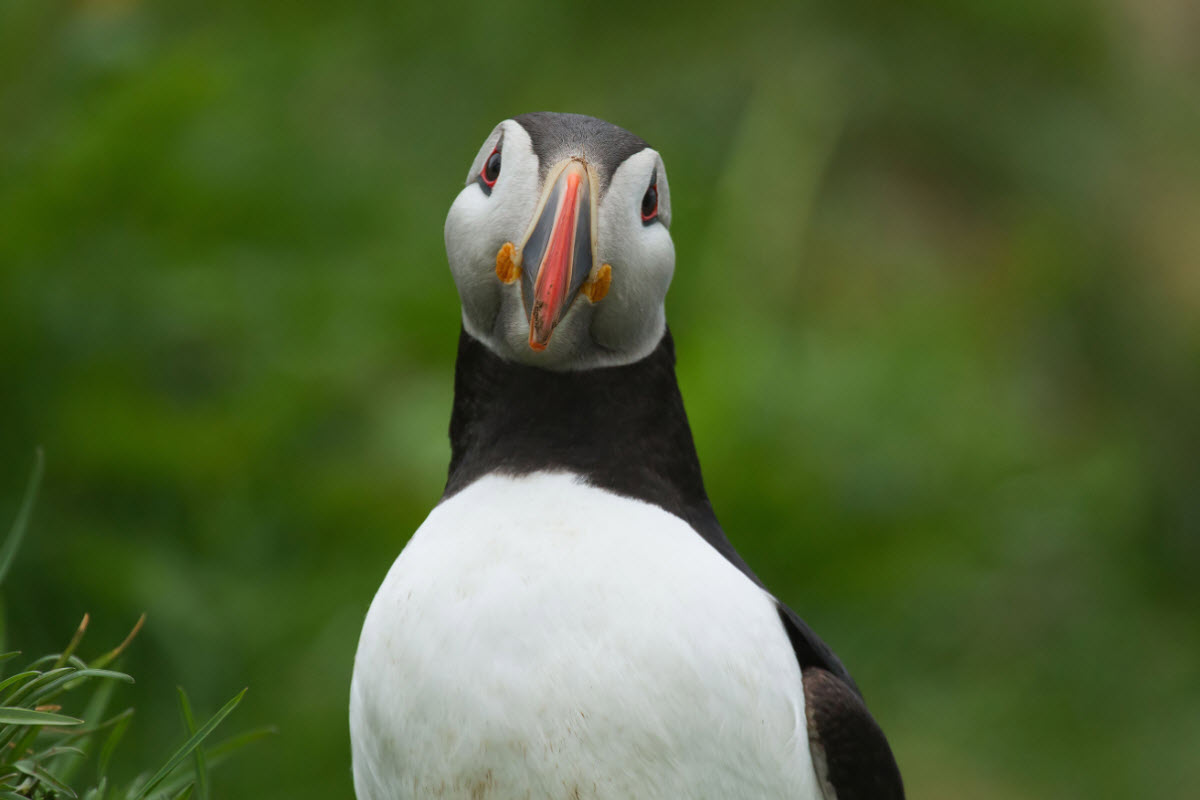 The incubation time is around 42 days and the parents usually leave the chick when he is about 40 days old. The chick is called Pysja in Iceland. Pysja usually leaves the nest in the middle of August and heads for the sea to look for food. In the Westman islands the Pysja sometimes gets lost because of the lights from the houses and wanders into the town. It’s a tradition for the children in Westman islands to save the lost Pysja, they gather them together and then release them to the ocean.

Best time to see the puffin in Iceland

Guidelines for Bird Watching in Iceland

During bird watching, it is important to keep few things in mind to minimize interference with the nature and disruption of nature.

Best places in Iceland to see the puffin 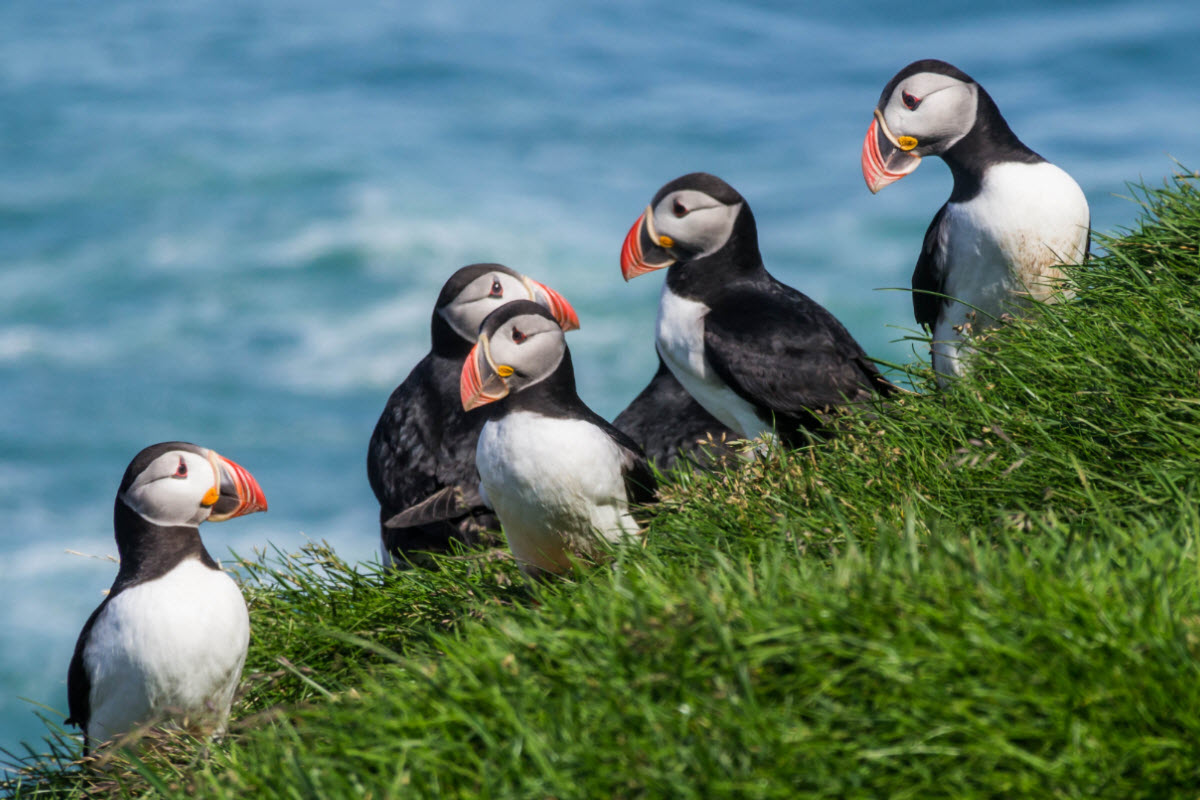 Vestmannaeyjar is the largest puffin colony in the world and the home of many seabirds during the summer time. The island is the perfect place to go bird-watching and for bird-photography. It’s easy to get to the island with the ferry from Landeyjarhöfn harbor near Hvolsvöllur in south Iceland. The ferry ride takes around 30 minutes to sail across to the islands. In winter it can take up to 3 hours sailing from the harbor in Þorlákshöfn town.

Látrabjarg
Located in the Westfjords 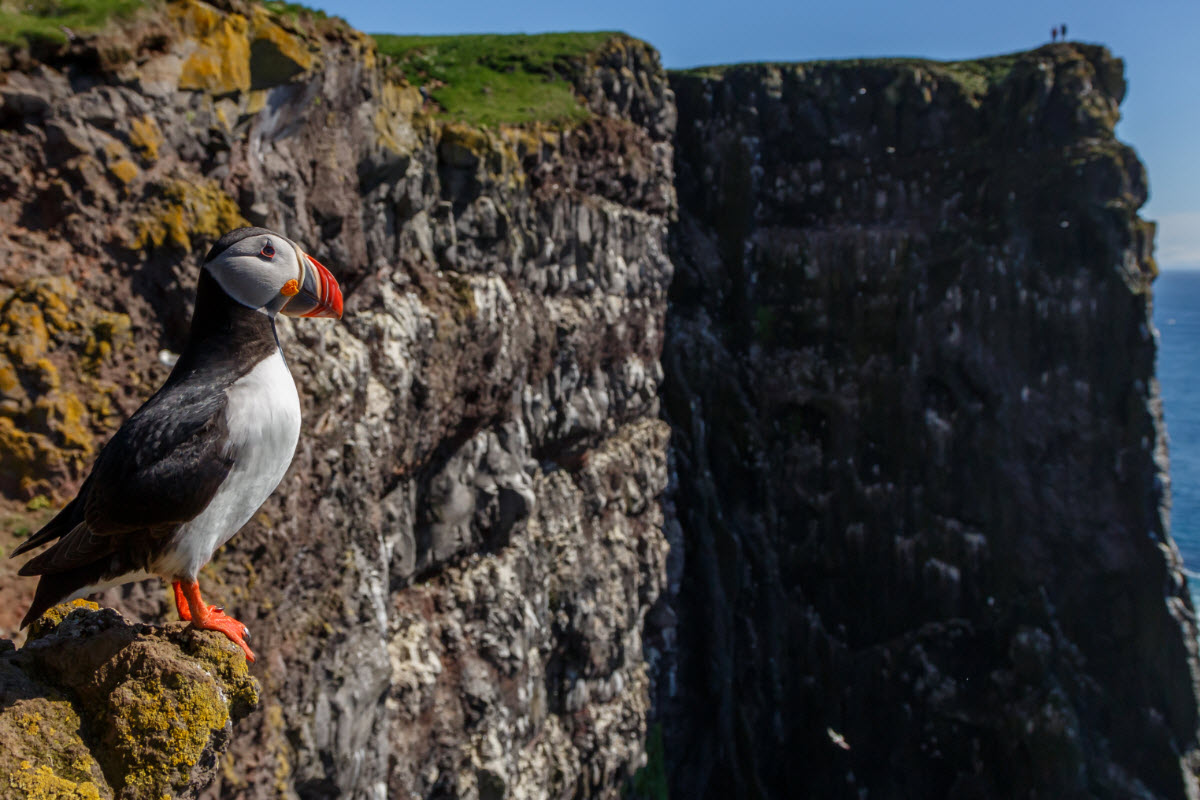 Látrabjarg are the highest cliffs in Iceland and one of the largest bird colony in Europe. Among the bird species that you can find there are guillemots, auks, northern gannets, kittiwakes, fulmars, and of course the puffin. You can say that the cliffs are paradise for bird lovers, but you can really get close to the birds in Látrabjarg and get the perfect photo. Be careful though around the edges they are sometimes loose and can easily break. 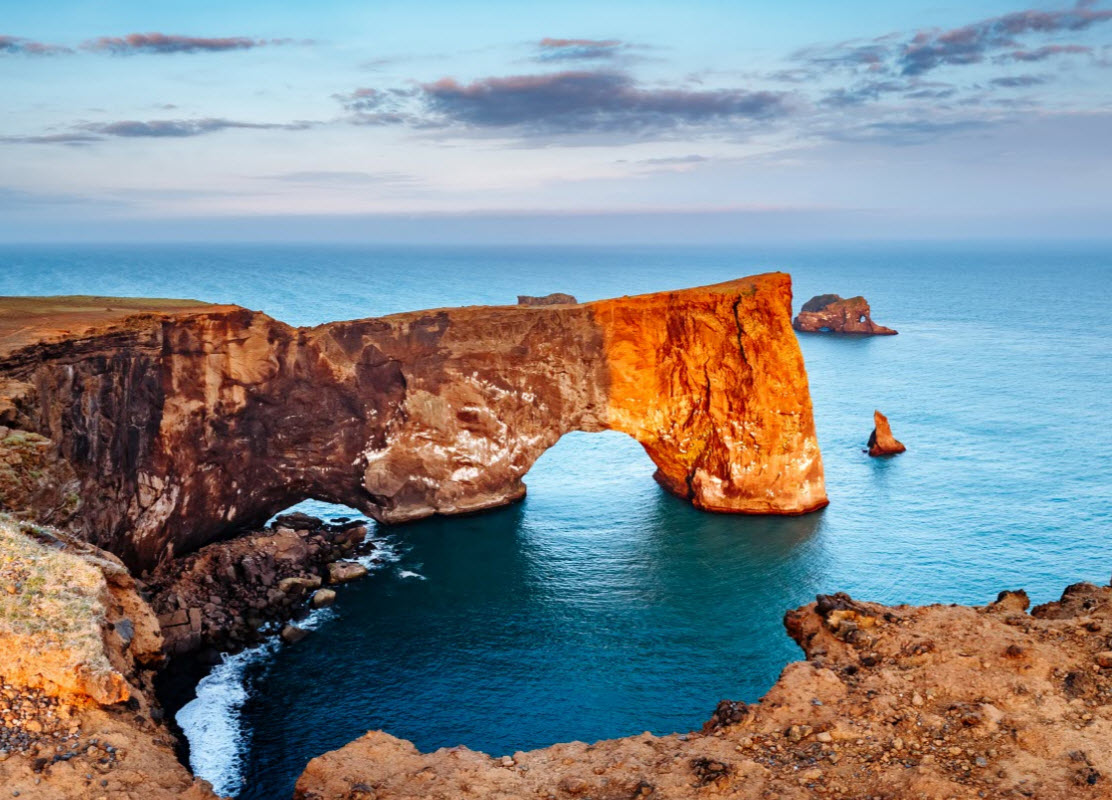 Dyrhólaey is the southernmost part of Iceland and a nesting place for puffins and other seabirds. This beautiful naturally formed arch can easily be accessed from the main road and the perfect place to see the puffin if you are travelling in the South. 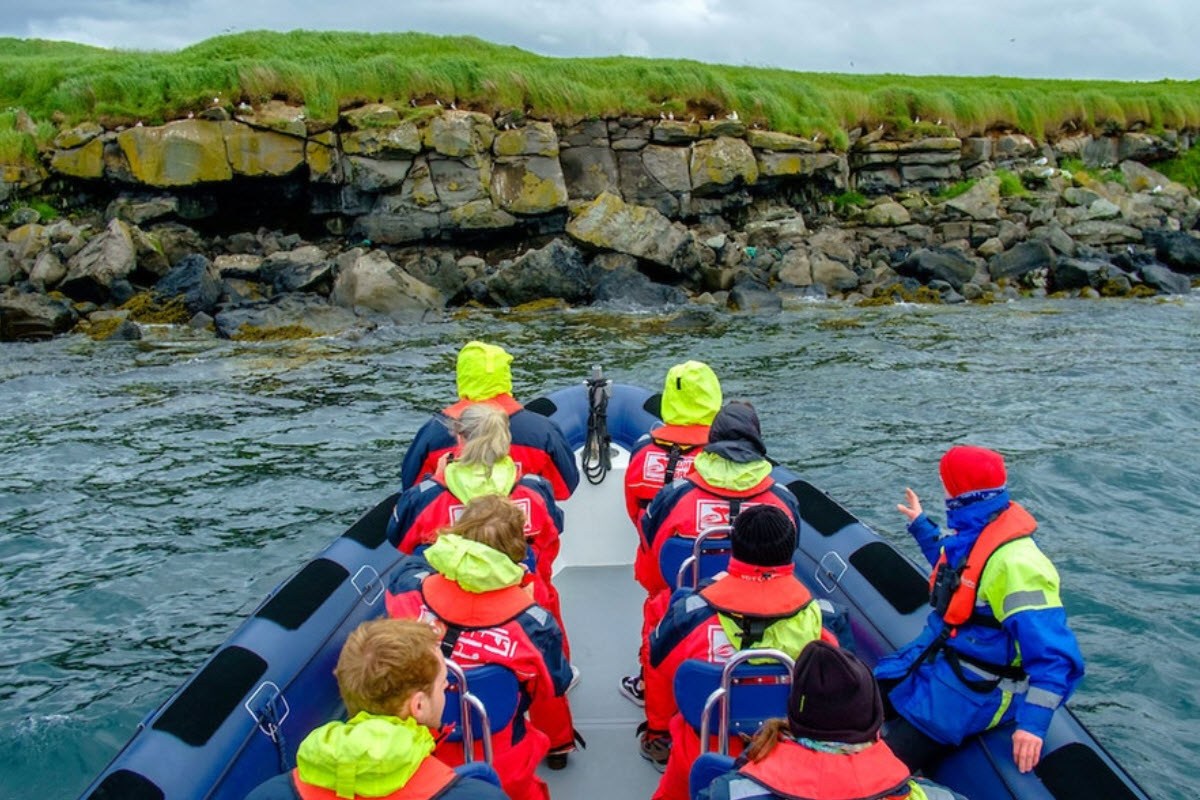 From Reykjavik there are two islands out in Faxaflói Bay called Akurey and Lundi (Puffin Island). You can take a boat ride from the Reykjavik old harbour, close to the islands. The islands are well known for their plentiful birdlife and in addition to puffins you have the opportunity to view other birds such as eider ducks, arctic terns, guillemots and cormorants. You can also combine the tour with a Whale Watching Tour.

Tjörnes
Located in North Iceland
Tjörnes peninsula in North Iceland is famous for the fossils that can be found there and the colonies of puffins and other sea birds that nest on the cliffs along the eastern coast. If you are travelling in the North and want to see the Puffin this is the place to go, as it is located not far from some of the highlights of the North. Located just few minutes from Húsavík, about an hour drive from Lake Mývatn and 1.5 hours from Akureyri.

Grímsey
Located in North Iceland
Grímsey island is the northernmost inhabited island off Iceland and is very unique in terms of nature and birdlife, the perfect place for bird-watching. You should be able to see a lot of Puffins and other seabirds like, Razorbills, Black-Legged Kittiwake, Auks, Northern Fulmar, Thick-billed Murre and many others, so the island Grímsey is a paradise for bird watchers and bird photographer. The main transportation to Grímsey is sailing with the ferry Sæfari. The ferry sails from Dalvík town to Grimsey and it takes about three and a half hours to get there with the ferry, depending on the weather. 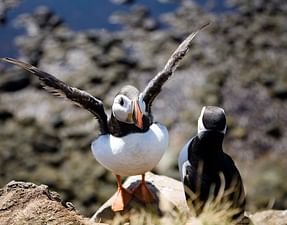