Whales off the coast of Iceland

Whales are common off the coast of Iceland and Iceland is a great place for whale watching, a place where people have the opportunity to get up close to these massive mammals in their natural habitat. Whale watching is something that everyone should try if they intend to visit Iceland. There are 23 species of whales off the coast of Iceland, some are there for a short time each year while others stay there longer. The best time for whale watching is late spring until August. 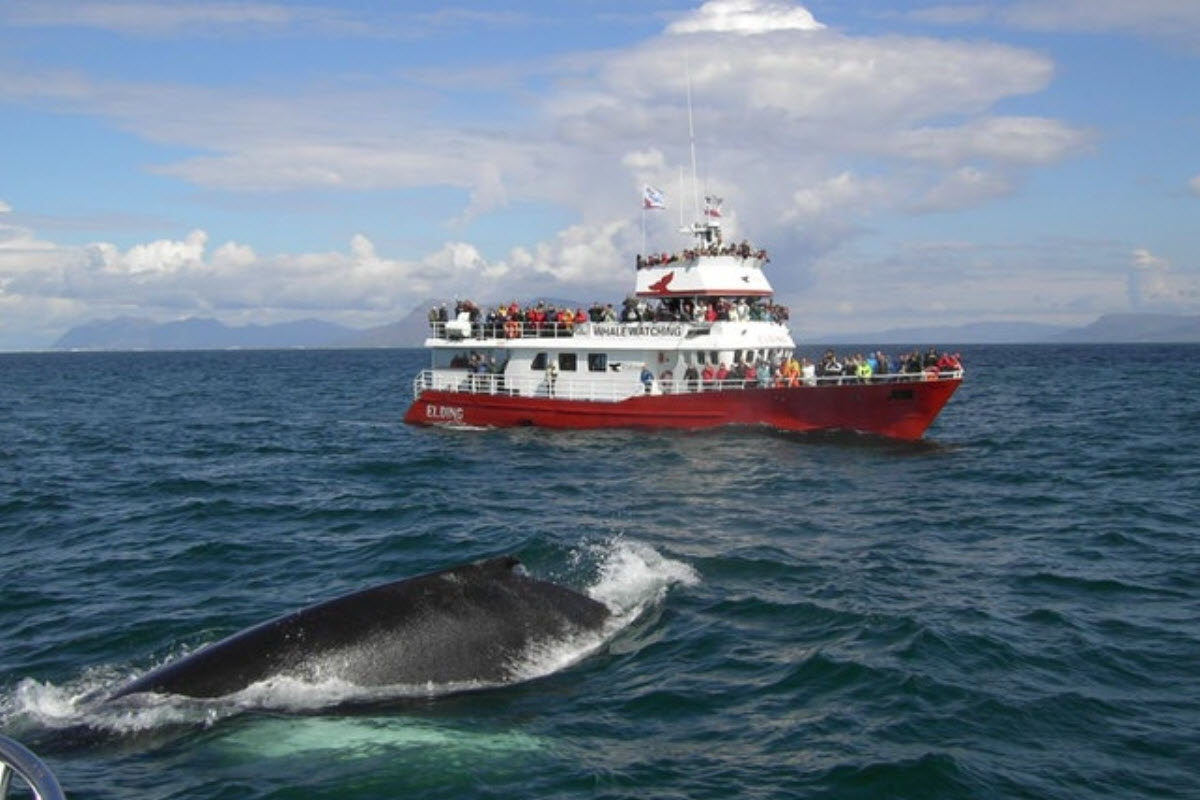 The best time to go whale watching is during the summer months (May-August) when the whales are feeding and breeding. They are lively and often offer a good close range for photographing and inspection. 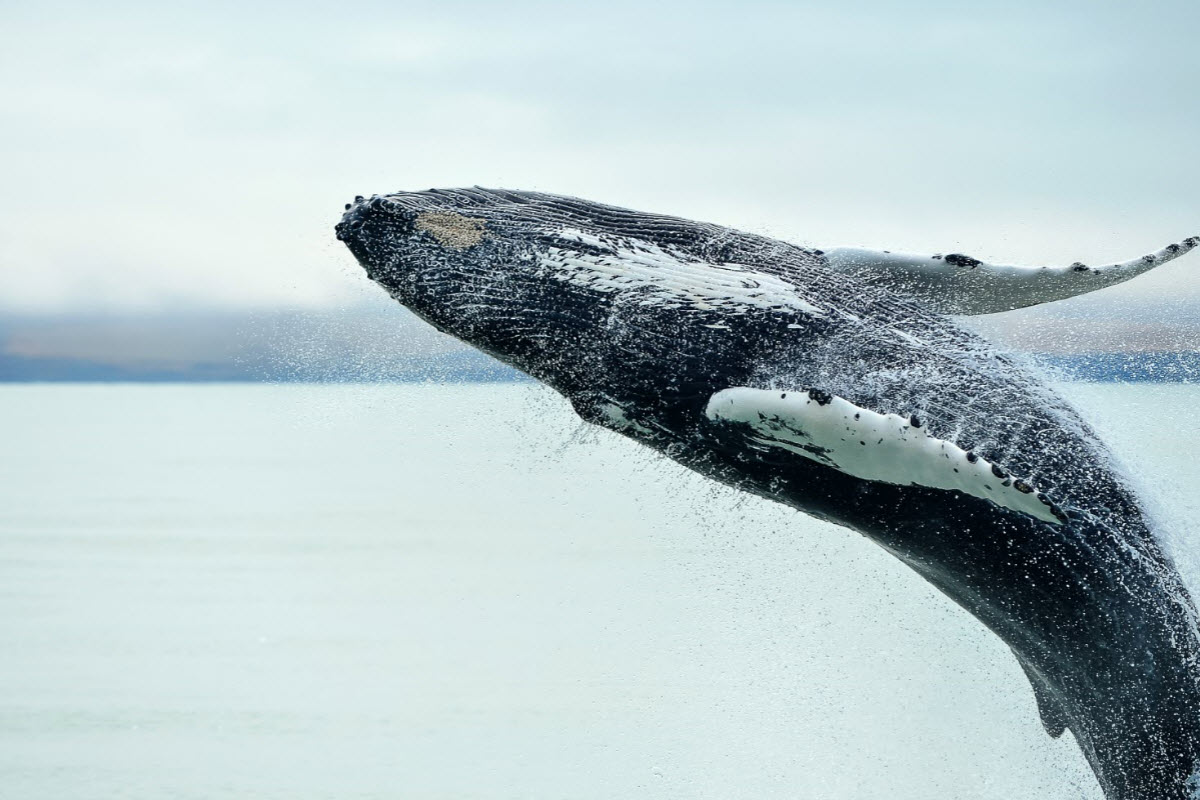 Whales are a diverse group consisting of baleen whales and toothed whales. They are different from the appearance and size can range from just over 2 meters and 130 kilograms to the size of 30 meters in length and nearly 190 tons. Whales are mammals that have adjusted very well to the life in the sea.

Baleen whales are filter feeders that usually are small animals (crustaceans) and plankton from the water, whales in the group are for example Minke whales, Long Fin, Blue whale and Humpback.

Toothed whales are the other group but they are predators and catch fish and other marine animals, an example of such whales are Sperm whales and Orca/Killer whales.

Many species of whales in the northern hemisphere travel thousands of miles every year to the cold and nutritious sea around Iceland during summer, they also mate late in summer or early fall. When fall and winter get closer, the whales return to the south where they give birth to their calves and feed them and wait until they are big enough to head north again.

Whales become puberty from three to ten years old. The female are usually fertile during the autumn and the gestation period is from 10 to 14 months. As for humans it’s usually one offspring that is dependent on his mother after birth, she feeds here offspring and protects. The females have on average of one calf every two to four years.

Whales communicate with high-frequency sounds that are different depending on the species, some are like a kind of singing. The Humpback whale is most known for great singing talent. It’s believed that whales use different sound in different situation as for communicate with each other as well as when they go hunting.

For teeth whales the most common are Orca/Killer whales and various species of dolphins, such as White Beaked. Sperm whales are fairly common.

Whaling has been conducted in the world for thousands of years. Back in the days whales were important food for people who lived nearby the sea. They were hunted for their meat but also bone and oil where used extensively. In particular, the use of whale oil was in the 18th and 19th centuries important fuel for lighting in many cities and towns around the world.

Nations that practiced whaling in the past were Norwegians, Japanese, Dutch and Americans, as well as native tribes in North America, Russia and Greenland hunted whales for food, and still do.

Iceland has issued licenses on Minke whales and Fin whales every year but interest has been declining, the whales that are hunted are also used for scientific purposes, in an attempt to better understand the way of life of these remarkable animals. 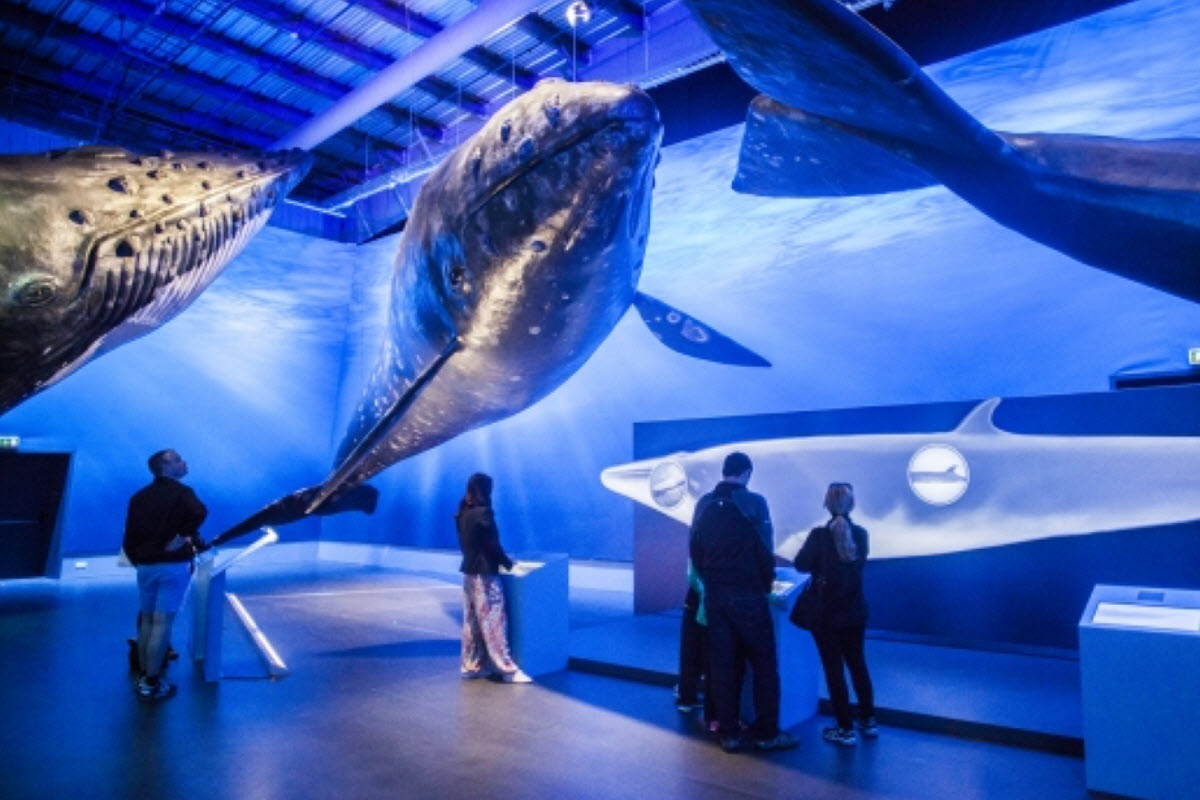 The Whale exception in Reykjavik

There are two great museums to see and learn about whales in Iceland, if you do not like going out to sea. It’s also ideal to visit the museums before or after going whale watching to get more information about their lifestyle and habitat. 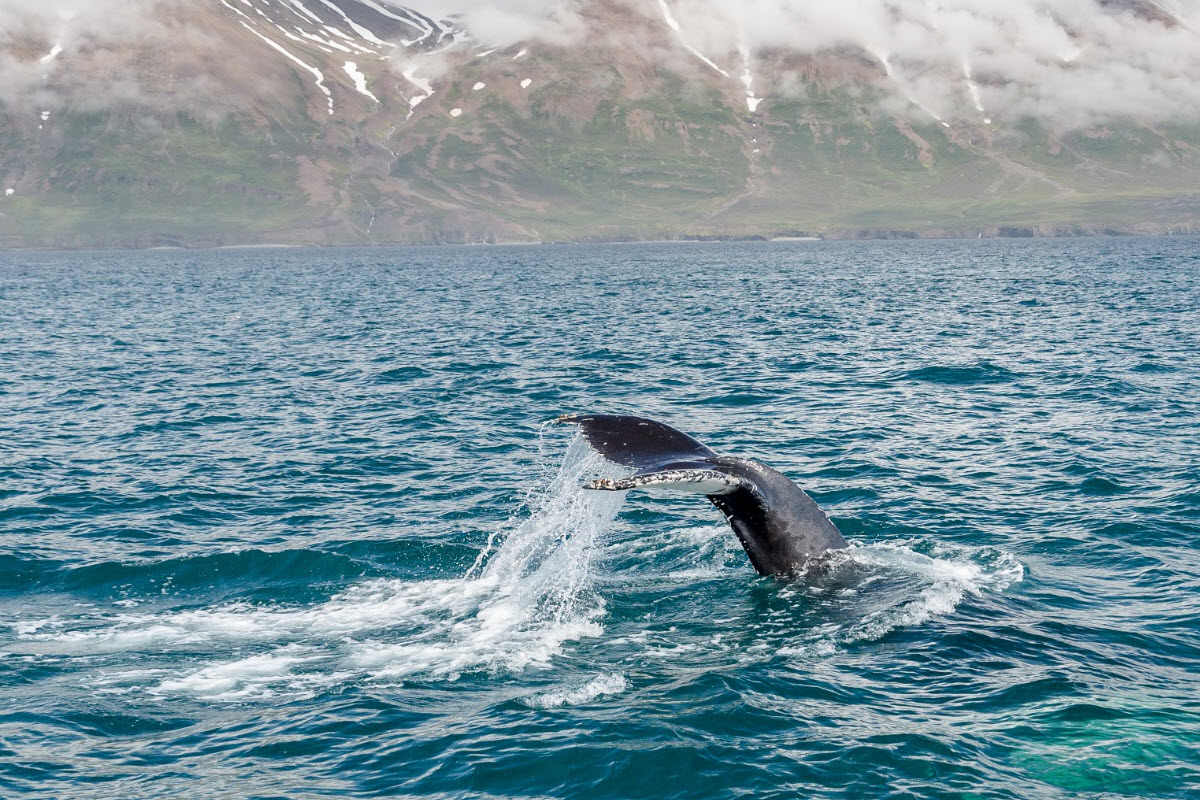 Blue Whale - Balaenoptera musculus
Is the biggest mammal on Earth and belongs to a group of baleen whales. Visiting Iceland in spring and summer.
Length: Up to 30 meters
Weight: Up to 190 tons
Life expectancy: Up to 110 years

Minke whale - Balaenoptera acutorostrata
There are two different species of Minke whale, the Northern and the Antarctic (Southern).
Minke whales are the second smallest baleen whale, and the smallest around Iceland.
Length: Up to 11 meters
Weight: Up to 10 tons
Life expectancy: Up to 50 years

Fin whale - Balaenoptera physalus
Fin whale belongs to a group of baleen whales, fast swimmer and hard to hunt in the old days because of its speed.
Length: Up to 22 meters
Weight: Up to 70 tons
Life expectancy: Up to 90 to 100 years

Humpback Whale - Megapteranovaeangliae
The Humpback whale is a baleen whale, he has long fins and is thick and shorter than the other baleen whales. The best singer of the whales as well as being very playful.
Length: Up to 19 meters
Weight: Up to 48 tons
Life expectancy: Up to 50 years

Orca / Killer Whale - Orcinus orca
Sometimes called the Wolves of the sea, are sociable and stay together in family groups. Toothed whales. They are predators eating mostly fish, seals and even other whales. They have long and big back fin.
Length: Up to 10 meters
Weight: Up to 10 tons
Life expectancy: Up to 50 years

White beaked Whale - Lagenorhynchus albirostris and Lagenorhynchusacutus.
White Beaked whales are toothed whales. They are among the most ambitious dolphins, they travel long distance, coming up the coast of Iceland in the spring. Often travel in both small and big groups, they are very playful. Eating a lot of fish mostly cod.
Length: Up to 1.2 meters
Weight: Up to 370 kilograms
Life expectancy: Up to 25 years

Sperm whale - Physeter macrocephalus
Sperm whale's are the biggest toothed whales. They are great divers and can dive down to around 3 kilometer deep and submerged up to 45 minutes. They are predator and feeds on giant ink fish, tuna, sharks and octopuses. There are mostly young males and old males who visit Iceland during the summer, otherwise staying further southLength: Up to 20 meters
Weight: Up to 50 tons
Life expectancy: Up to 70 years A Reykjavik fishing tour that's fun for everyone - no experience needed! Spend the day watching whales in their natural habitat, and then learn more about them in the largest whale exhibition in Europe.