A Visit to Reykjanes Geothermal Area in the Westfjords of Iceland 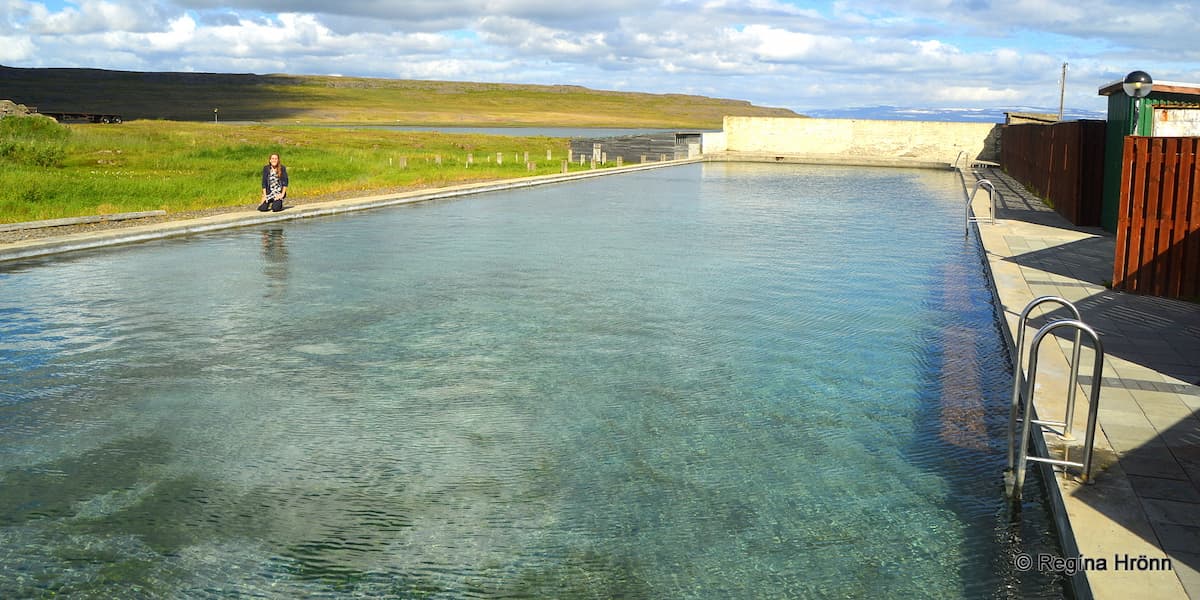 In this series of travel-blogs, I will be showing you places of interest on the northern part of the Westfjords of Iceland by route 61, Djúpvegur, from Reykjanes to Bolungarvík village.

Let's first visit Reykjanes geothermal area. Here we stayed for the first night at Hotel Reykjanes as I had heard that they had a fantastic swimming pool, which is referred to as the largest hot tub in Iceland.

I also wanted to explore the geothermal area by the sea behind the hotel. 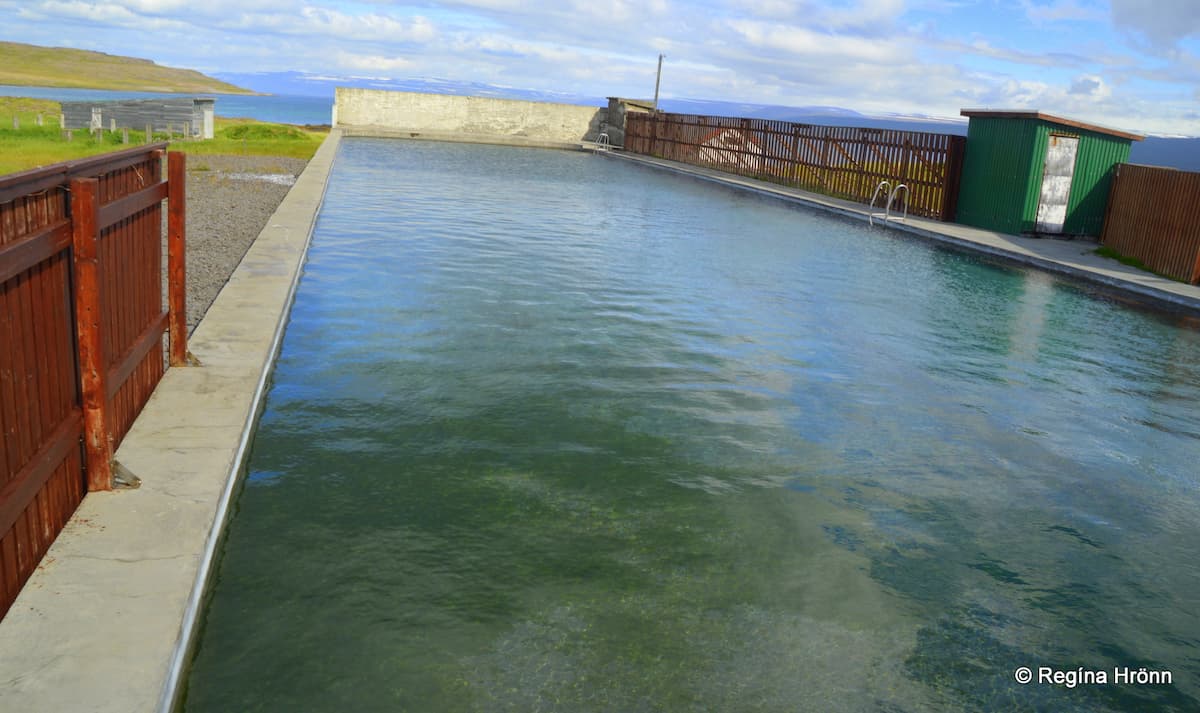 The swimming pool at Reykjanes

The lovely swimming pool Reykjaneslaug has now become my favourite swimming pool in Iceland. It is quite large, 50 x 12.5 meters.

The pool is warm so it is like swimming in a hot tub, which is absolutely heavenly. Few things beat soaking in a hot pool in nature after a long day of travelling. This is one of the places where I wanted to stay for a couple of days and recuperate, but unfortunately, we could only stay here for one night.

The Westfjords are vast and we had a lot of things to see and do, places to visit, and tours to join ;) The warm pool, which gets its warm water from a geothermal area close by, can even become too hot so we enter at our own risk.

There is an entrance fee to Reykjaneslaug which is included if you stay at the hotel.

Hotel Reykjanes has been operating since 2002 and the owners of the hotel have spent hundreds of millions of ISK in the reconstruction of this wonderful place. The fenced-off hot-spring area next to the swimming pool

Next to the swimming pool, you will see one of the hot springs. There are hot springs all over the place really, and some are even under the hotel (which earlier on, from 1934, operated as a school - Héraðsskólinn á Reykjanesi, until 1991) and have been covered up.

Beware of the cranky Arctic tern which nests in this area and hangs out by the hot spring. It fearlessly attacked me while I was visiting the pool. This cranky bird seems to have a special interest in attacking me when I am in nature minding my own business.

I know that it is only protecting its chicks, but it sometimes goes to the extreme to attack people who are not even close to its nesting place. 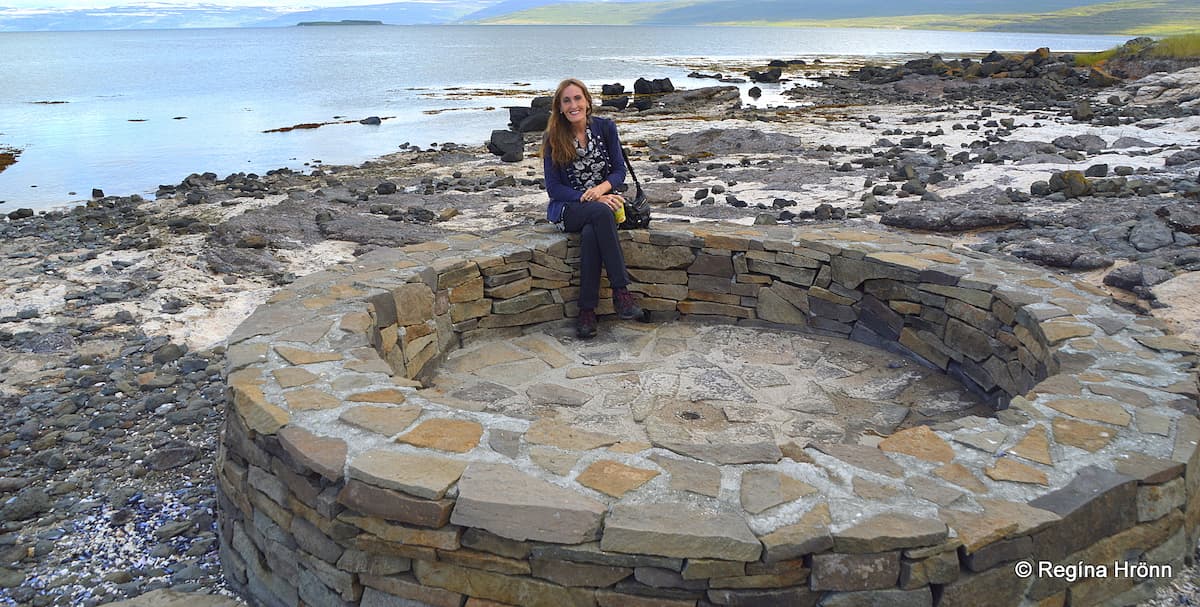 Some 200 meters north of the hotel and swimming pool you can visit Hveravík - Hot Spring Cove - where there are several hot springs.

At Hveravík cove you can see how the rocks are whitish from the heat coming from the hot springs, but according to Orkustofnun - Iceland's National Energy Authority the water can be as hot as 82.8°C in some places in the cove. Hot springs can also be found in the sea.

Gamla laugin - the old geothermal swimming pool by the sea

I think that most people stay at the hotel or visit the pool and then continue on to explore the Westfjords. But there is an interesting area behind the hotel, by the sea.

There you will find a geothermal area and the remains of the old swimming pool, a Salt factory, trolls, and seals in abundance. 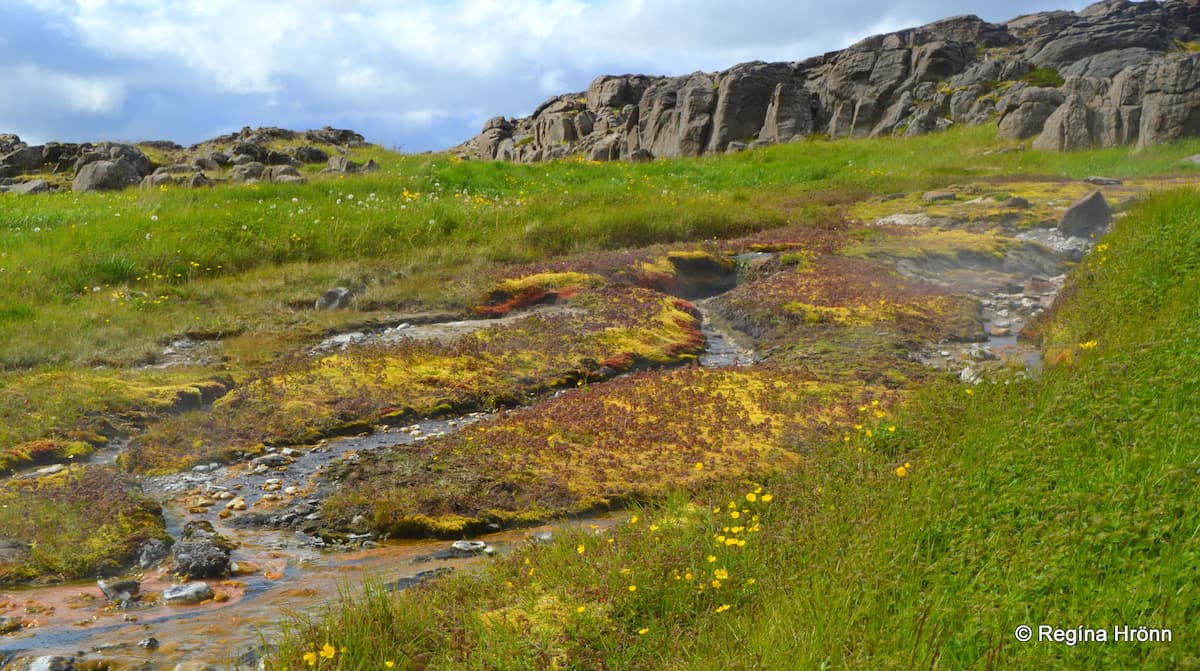 The geothermal area and Kolahver hot spring which is 86.5°C so be careful here

By the geothermal area closer to the sea, you will find the old swimming pool "Gamla laugin".  Here, in this old pool, swimming lessons for the locals took place prior to the erection of the swimming pool by the hotel.

The old swimming pool was built in 1889, and there was an even older turf and stone swimming pool, which was erected in 1837.

Here swimming lessons took place from 1830-1927 according to a sign by the old pool. This old swimming pool is no longer in use and it was relatively cold when I touched it. 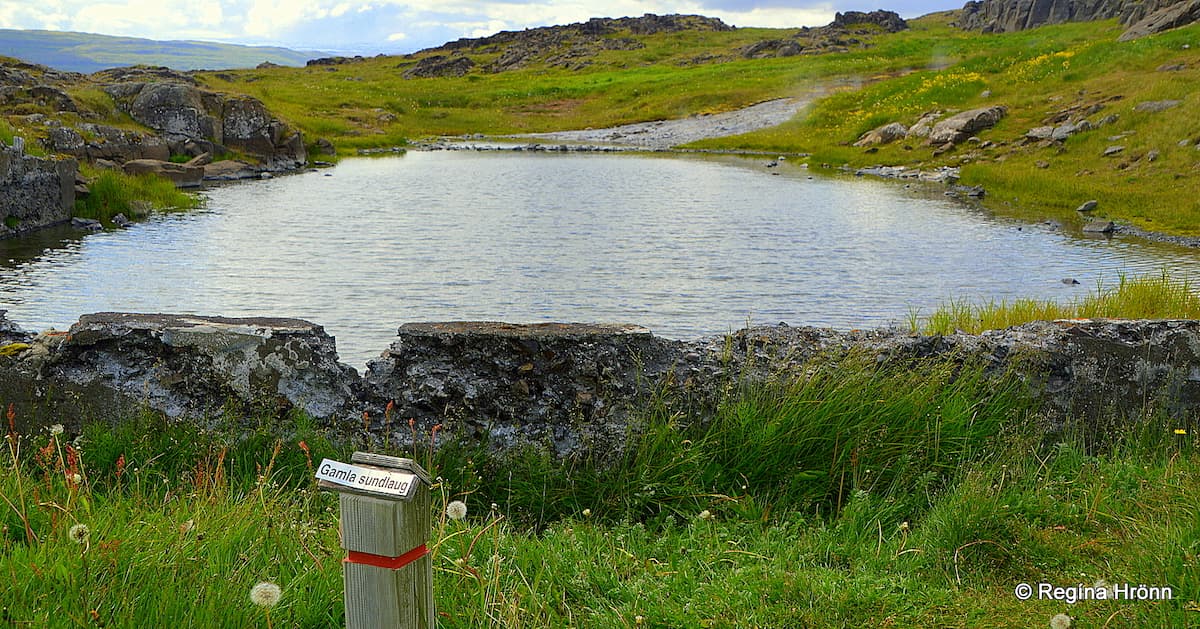 The old swimming pool by a geothermal area - Gamla laugin

We cannot see any traces of the turf swimming pool, but the molten swimming pool, which we can visit by the sea, is believed to have been built on the ruins of the older one (Ref. Rafhlaðan - Fornleifar Reykjanesi).

Reykjanes is one of only 3 places in Iceland where the beautiful purple flower vatnamynta (Icelandic name) can be found by geothermal areas. 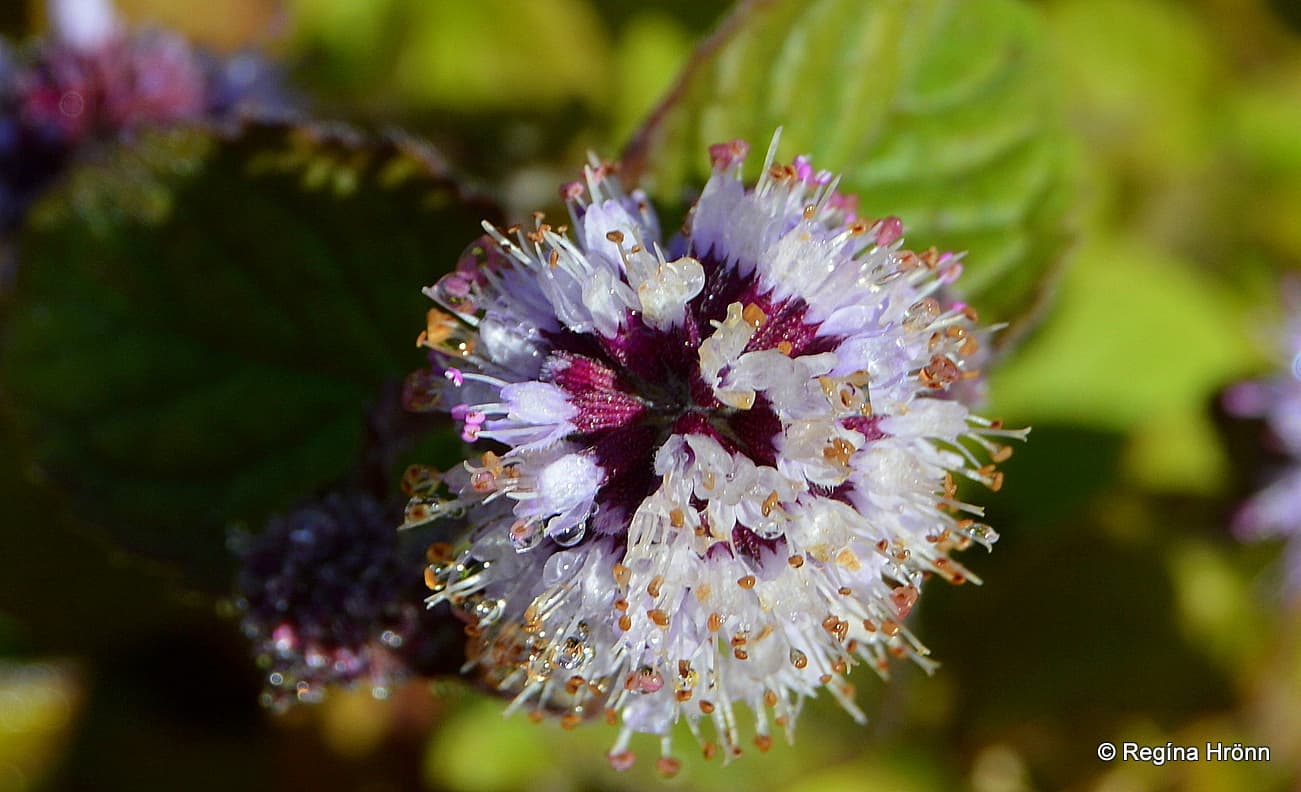 The Latin name for it is Mentha aquatica and is preserved in these 3 locations in the Westfjords of Iceland; here at Reykjanes, at Reyhólar on the south part of the Westfjords Region, and at Svanshóll in Bjarnafjörður at Strandir.

A German gardener brought this plant to Iceland and cultivated flowers here at Reykjanes. The flower was then sent to Reykhólar and Svansóll. Look out for it when you visit these areas, it is one of Iceland's rarest flowers.

Saltverksmiðjan - the Salt Factory at Reykjanes

By the sea behind the hotel, you will also see some structures at the spot where the old Saltverksmiðja - the Salt Production was located, but it was Iceland's first heavy industry, as it were. This industry started way back in 1773 and operated for 2 decades. 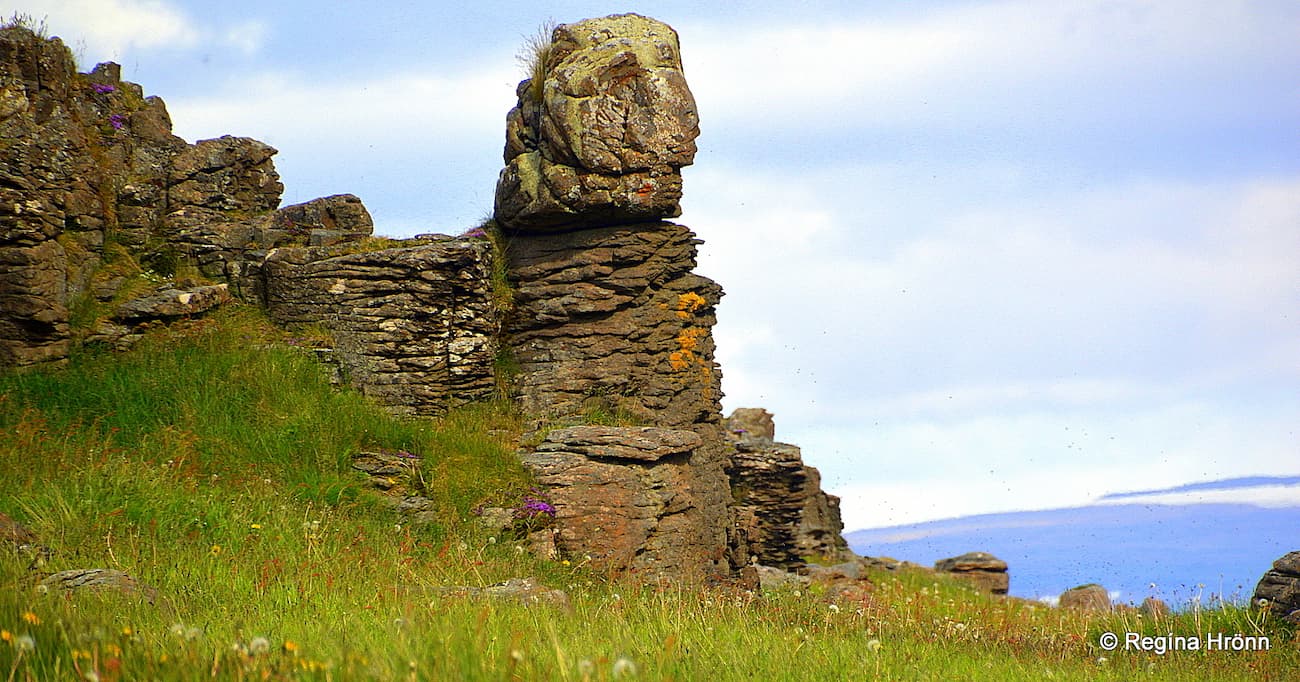 The Troll Kerling - the female troll

We decided on driving to the end of the gravel road to see where it would lead us. On the way, I noticed this prominent rock and as I know from my travels in Iceland, then many such rocks are petrified trolls. I walked up to it and saw a small sign "Kerling" or the Female troll :)

Another prominent rock stood tall a little bit further down the road; with the sign "Karl" or the Male troll.

I often refer to folklore in my travel-blogs with stories from Þjóðsögur Jóns Árnasonar - the Collection of Folklore by Jón Árnason (5 volumes). I have looked for folklore with an explanation of these rocks but cannot find any. I would love to know more about these trolls. 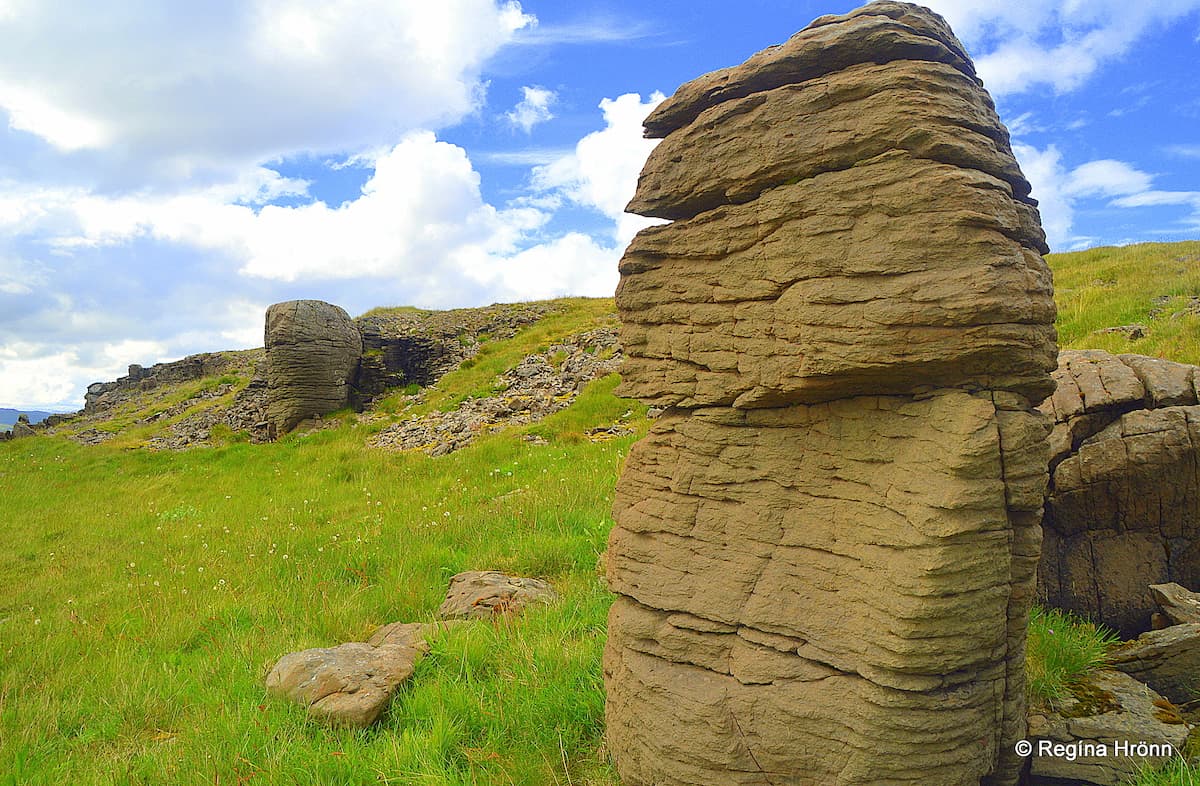 The Troll Karl - the male troll

There are so many rocks around Iceland which are called Karl and Kerling - the Male and the Female trolls, and they are always trolls, who had been doing some business at night and were caught off guard by the first rays of the sun.

But as is common knowledge here in Iceland, then night-trolls cannot tolerate the sun and get petrified by it. A curious seal at Reykjanes

We continued driving on this gravel road and reached a beautiful spot, where I noticed seals in abundance swimming in the sea and resting on the rocks.

We stopped the car and I went down to the sea to check out the seals. It was great fun watching them from the shore and they seemed to like checking us out as well :)

I stayed on this beach for the longest time with the seals as with my husband who was busy taking videos of the seals.

Further on, at Hvítanes, is another great spot for watching the seals, and you can get very close to the seals. I will show you that location in another travel-blog.

But the difference between Hvítanes and this lovely spot in Reykjanes, is that here I was alone with the seals and the tranquillity was heavenly. This area is also a good location for bird-watching.

Hvítanes is a more crowded place, which makes it a different, still very enjoyable experience for visitors, don't know what the seals think about it though. 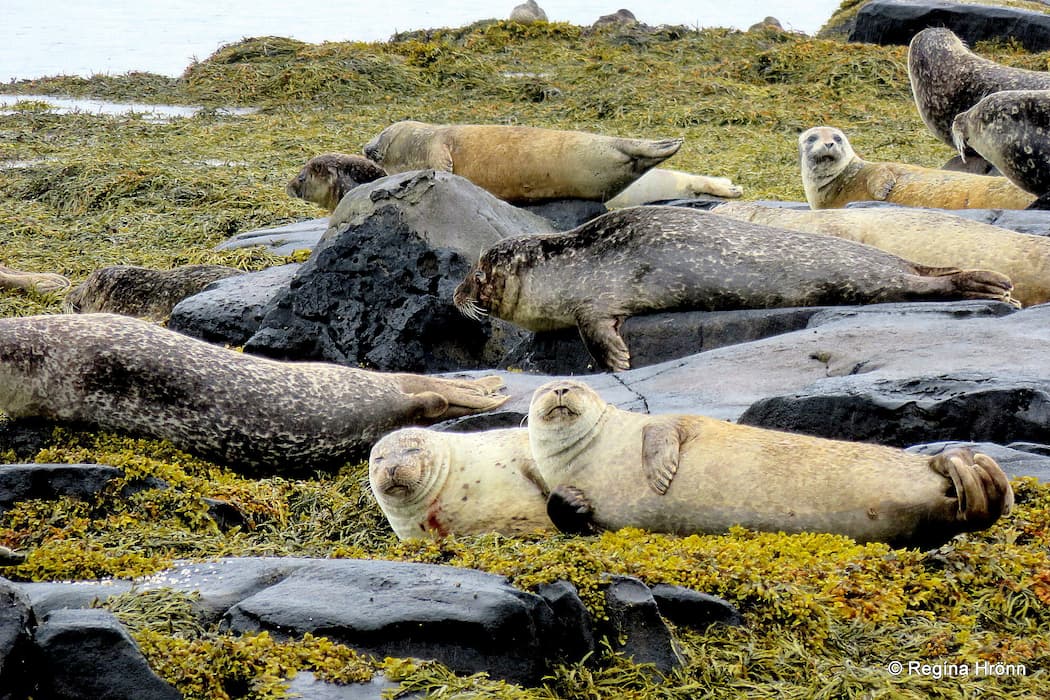 Seals in abundance at Hvítanes peninsula

In my next travel-blog I will show Vatnsfjörður where you will find an archaeological site where an old Viking house was discovered. And a huge cairn named after one of the main characters of the Icelandic Sagas, Grettir Ásmundarson:

Here you can see the location of Reykjanes on Google Maps. 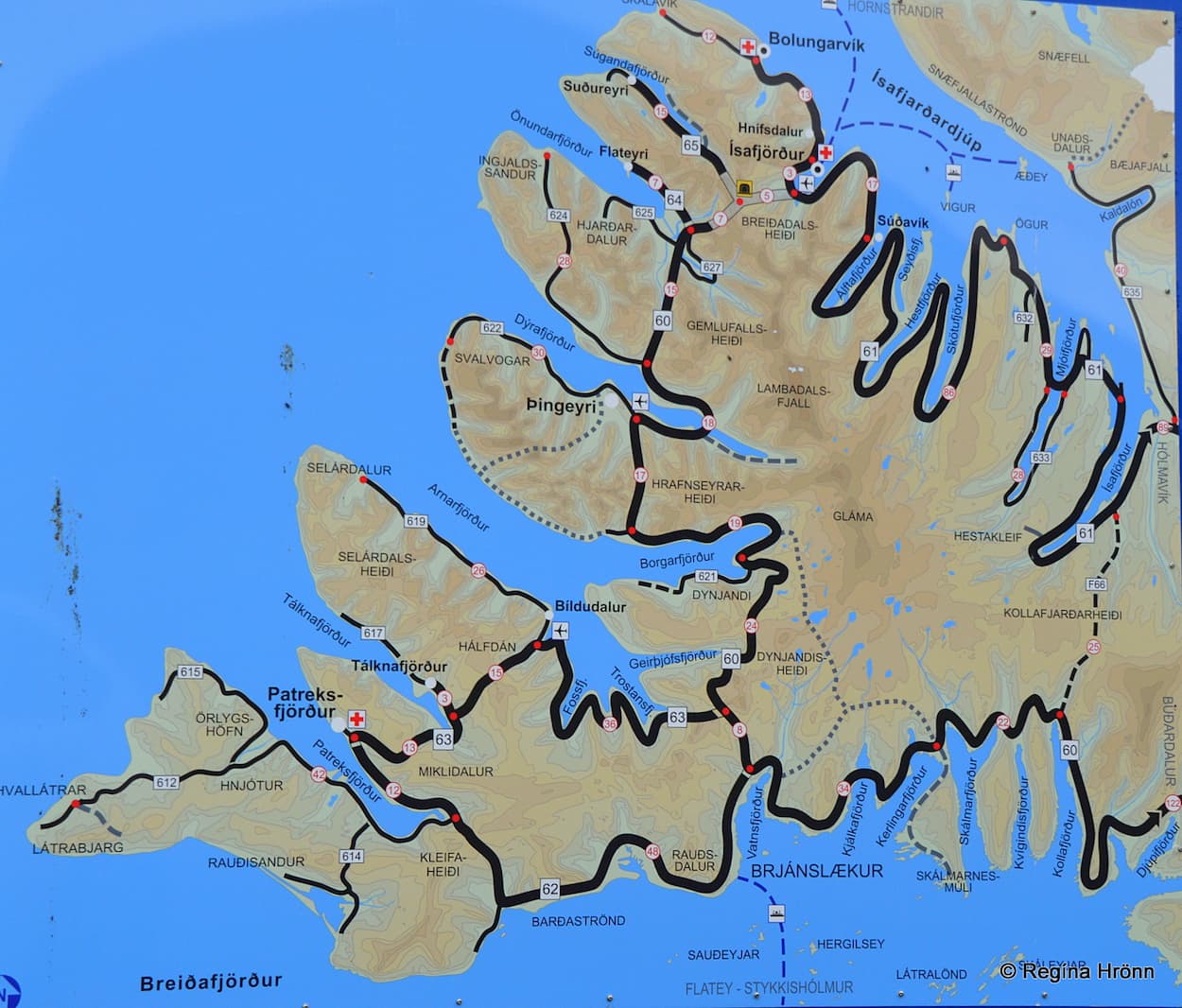 Small group tour to the Golden Circle, crater Kerid, and Fridheimar Farm with a guided visit in the farm's stables and greenhouses