The Spectacular Ice Caves in Iceland

One of the most popular winter tours in Iceland is a visit to the beautiful ice caves which form in Iceland‘s glaciers.

Some of the ice caves have been discovered in the edges of the glaciers, making it relatively easy to visit them, while visiting others might include a ride in a snowmobile or in huge super trucks. A blue and black ice cave in Breiðamerkurjökull glacier

The ice caves form in the wintertime and can be visited from late October until late March.

The ice caves melt and collapse and new ones form when it starts getting colder again.

Our glacier guides search for new ice caves in the autumn and I am always very excited to see what the new ice caves they find look like. Blue, black and white ice inside an ice cave

Through the years I have visited several ice caves, both the seasonal ice caves and ice caves which can be visited all year round, and I am going to show you what they looked like at the time of my visit.

First, I am going to show you the Katla Ice cave, which is located in the Kötlujökull glacier in South-Iceland. Beneath the massive ice cap, the subglacial volcano Katla is lurking and you can see black stripes of ash in the ice from previous eruptions in the Katla volcano.

This pitch-black ash has been pressed into the ice for centuries. So we are also seeing ancient history when visiting the ice caves.

Deep inside the Katla ice cave

Like the seasonal ice caves then the Katla ice cave changes a lot in appearance every year.

I first visited the Katla ice cave back in 2018 and then we were able to walk deep inside it as you can see from my photo above.

On my 2021 visit to the Katla ice cave it looked like this - always majestic.

The Katla ice cave can be visited all year round on guided tours from Vík village in South-Iceland.

You will be driven from Vík village across vast black sand plains and after reaching the destination a relatively short hike will take you to the Katla ice cave.

A guided tour to the glacier:

Inside an ice cave in Breiðamerkurjökull glacier

Several ice caves have formed in the Vatnajökull glacier which is Iceland's largest glacier and Europe's largest ice cap by volume. Beautiful black and blue ice inside an ice cave

These extraordinary ice caves form at the edge of the glacier tongues when water carves an opening in the thick ice.

It is really special to be able to have a peek inside the ice caves and to examine the shiny black and blue ice formations.

Walking through tunnels and domes of shiny blue ice is extraordinary and will leave no man untouched.

Squeezing myself through a powder blue ice tunnel in Fláajökull glacier

I visited ice caves for the first time back in January 2016, when they were starting to become popular, and fell in love with them at first sight.

Visiting the ice caves is an experience that no words can describe, and no matter how often I visit them I am always in awe.

I believe that the expression on my face in the photo above says it all :)

The ice cave in Fláajökull glacier was the first ice cave I had ever seen. Crawling under a glacier

We hiked for quite a while to the ice cave and then squeezed through a narrow ice cave tunnel of the most amazing powdery blue colour.

Then we crawled on our hands and knees under the glacier where a beautiful ice cave appeared.

On the same tour, we visited another much bigger ice cave in Breiðamerkurjökull glacier.

That ice cave was named the Crystal ice cave and it was a dome of beautiful sapphire blue sparkling ice.

Sadly the ice caves melt in the summertime, but new ones form in the wintertime, so visiting the ice caves is always a new and exciting experience.

My next visit to the ice caves in the icefalls of the mighty Vatnajökull was in the spring of 2021.

On that tour, which lasted for 2 days we visited 2 ice caves in Breiðamerkurjökull glacier and the Katla ice cave.

One of the ice caves was black from trapped ash inside the ice and reminded me of shiny black volcanic glass, as you can see in my photos above and below.

Inside a shiny black ice cave

The first photo in this travel-blog was also taken inside this ice cave.

It was really amazing to walk through a tunnel of shiny black ice.

It was relatively easy reaching this ice cave as the tour guide was able to park the car very close to it. 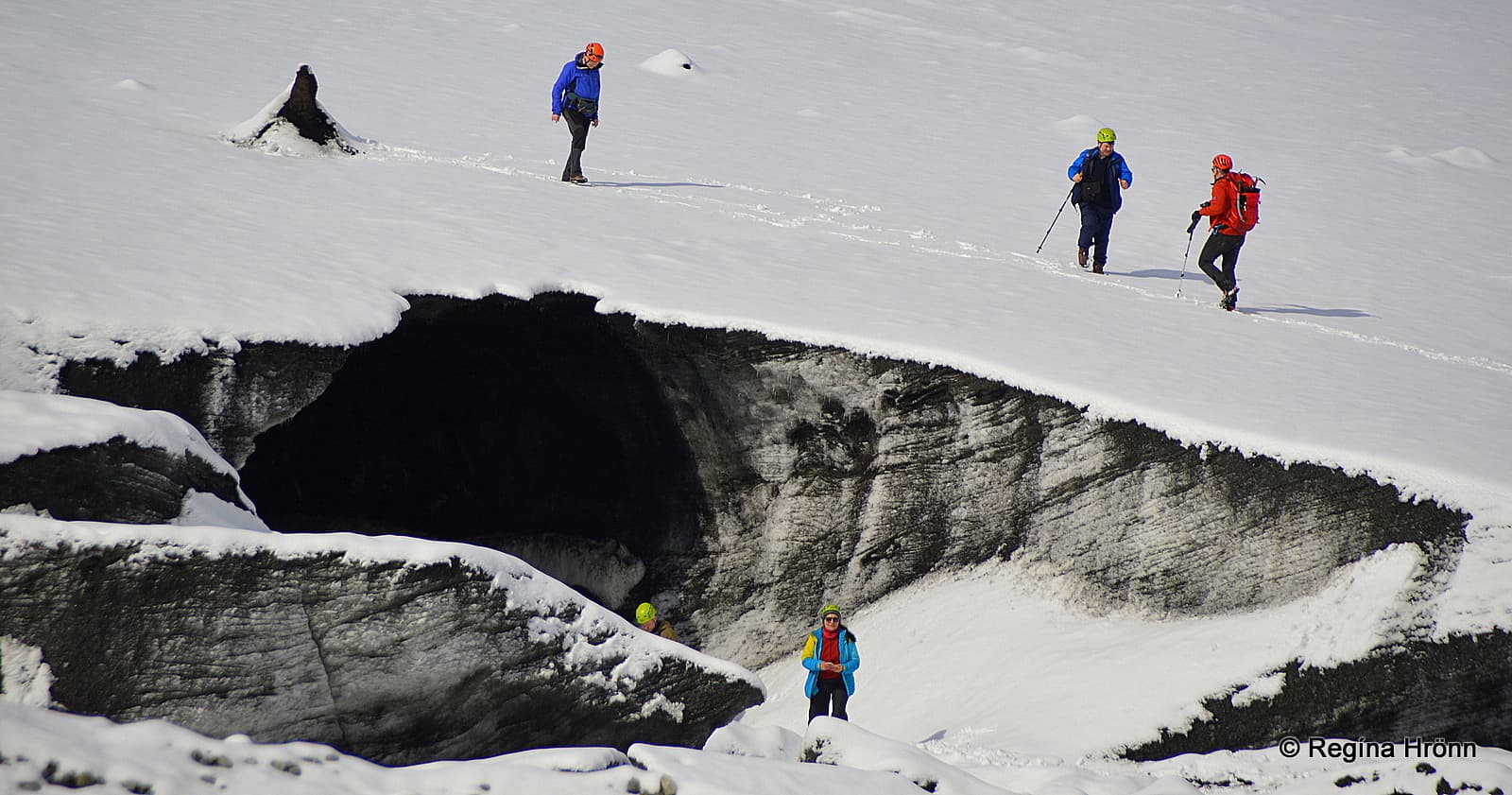 An ice cave in Breiðamerkurjökull glacier

Next, we visited a bigger ice cave in Breiðamerkurjökull which had blue, black, and white ice.

We had to hike for half an hour to reach this ice cave, but it was worth it for sure.

We entered a dome with the most amazing blue ceiling. The walls were white and black but the ceiling was out of this world.

Everywhere we looked there was shiny black and blue ice and it felt like we were enveloped by the ice cave.

After admiring this sight for a while and taking a myriad of photos, the glacier guide took us further into the ice cave.

The ice cave reached quite far into the glacier and sky windows let the light inside, making it easier to take photos. 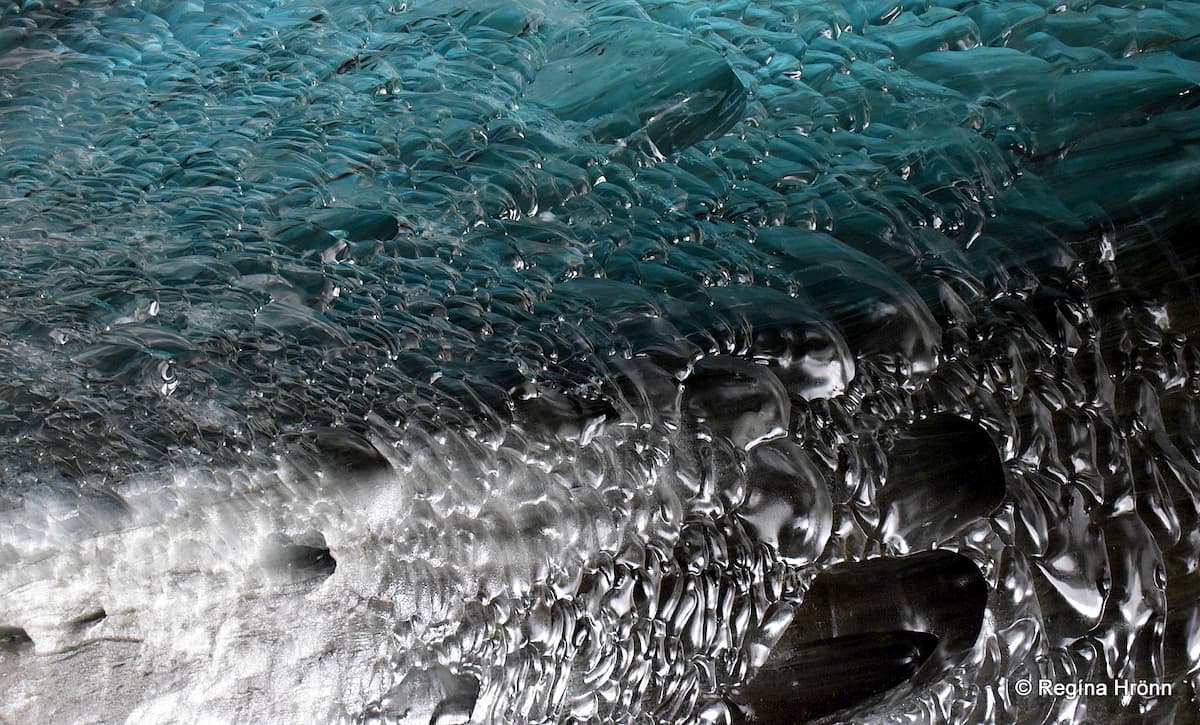 Inside an ice cave in Breiðamerkurjökull glacier

I always use flash when taking ice cave photos as I think that the photos come out better with the flash.

I carry heavy cameras with me when I travel, but nowadays most people take photos on their cell phones.

And I see that the photos taken on new cell phones are also very good. I will stick wit my cameras though for a while.

Staring into the darkness...

The glacier guide led us by the river deep under the glacier where he told us to sit down, turn off all lights, and stare into the darkness.

After a while, when our eyes had started adjusting to the darkness, we started seeing the blue dome of light appearing above us, an extraordinary sight.

A shiny blue ceiling inside an ice cave

I left the group behind in the darkness and went back into the light and blue dome close to the entrance as I wanted to take more photos.

I am more at ease being closer to the entrance of ice caves. But that is just me ;)

I was alone in this section of the ice cave

There is one rule regarding ice caves: The ice caves can only be entered with professional glacier guides and the right equipment.

Always follow the glacier guide and never leave the group or go further ahead into the ice caves.

I left the group but that was in the direction of the entrance to the ice cave and I knew that they would be following me shortly. I just needed a moment to take photos with no people in them.

So always join guided tours when you visit a glacier:

A snowmobile ride on Langjökull glacier

Visiting the ice cave in Langjökull glacier was a thrilling experience.

After having been picked up at Gullfoss waterfall, and driven to the base camp in a huge truck, we ventured on a 25-minute snowmobile ride on the glacier in order to reach the ice cave. Inside an ice cave in Langjökull glacier

This was the first time I had ever been on a snowmobile ride, but we only drove at a speed of some 30 km in a convoy, so we quickly got used to it.

The photos are from my visit to an ice cave I visited a couple of years ago in Langjökull glacier.

In the winter of 2021, a huge ice cave dome was discovered in Langjökull glacier, the biggest one which has been found so far.

I have yet to visit that ice cave, but will show you photos from it after my visit.

The ice cave is very beautiful, blue and white ice with stripes of ash from volcanic eruptions.

The ice caves in the glaciers are formed by rivers coming from under the glaciers and when the guides are on an ice cave hunt, as they call it, then they look for the rivers as often there are ice caves behind them.

The glaciers are retreating and the glacier guides got the good idea to dig into the glacier as they knew that the following year the ice cave would most likely have collapsed.

They even carved an altar into the ice and a wedding has taken place inside the ice cave, which has been consecrated.

We spent half an hour inside the ice cave admiring it and taking photos. And then it was time for another 25-minute snowmobile ride back to the base camp :) Snowmobiles in abundance on Langjökull glacier

It was -15°C (5° Fahrenheit) on the glacier so everybody got a snowsuit, special gloves, and a big helmet, which came in very handy when the cold wind was blowing in our faces during the snowmobile ride. So we didn't even feel the cold.

This was quite an exhilarating tour, highly recommended.

Guided tours to the ice cave:

Into the Glacier - ice cave tunnel in Langjökull Inside the ice cave tunnel - Into the Glacier

It is called Into the Glacier and I have visited it twice, once just to see this one-of-a-kind ice cave tunnel and on another occasion on a day tour, where we stopped by many of the wonderful sights on the Silver Circle in West-Iceland on the way to the glacier.

Huge trucks will drive you to the ice cave tunnel

Once you reach the glacier you will be picked up by a former NATO missile-launcher 8-wheel glacier truck.

Just being driven around in such a truck for 40 minutes on Iceland's second-largest glacier is quite an experience.

The ice cave tunnel was opened in the summer of 2015 and can be visited all year round.

Inside the man-made ice cave tunnel

Lights have been put up inside the ice cave tunnel and inside one of the ice chambers, you will find a chapel with an altar.

Just imagine getting married deep inside the blue heart of Icelands's second-largest glacier :) 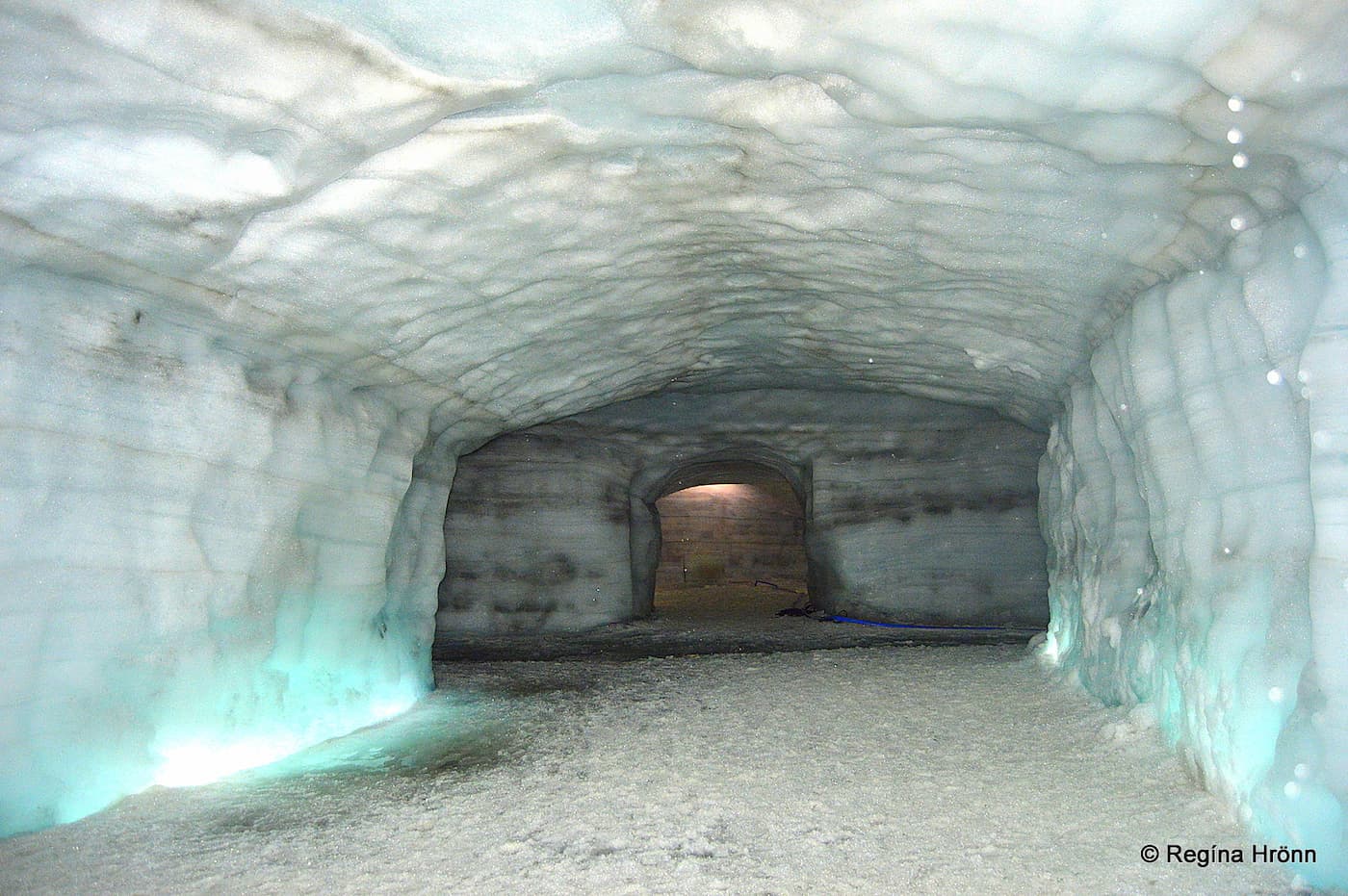 Before entering an ice cave you in Iceland will be provided with the necessary equipment and given safety instructions.

You will be given glacier crampons and a helmet (often with lights).

Dress warmly and wear layers and waterproof clothes. Good hiking shoes are necessary, a hat and gloves, sunglasses, the works.

The same thing applies to a visit to the ice caves as when the Northern Lights put on a spectacular show - it never gets old.

The man-made ice cave in Perlan in Reykjavík

I hope you have enjoyed reading about the ice caves of Iceland - if you fancy including an ice cave tour or other winter activities in your Iceland visit then there are several tours available:

A selection of ice cave tours in Iceland

Have a lovely time in Iceland :)